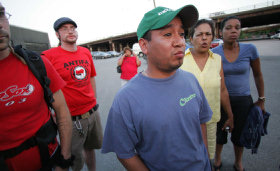 7/15/2008
Over 150 community members rallied at the ICE office in downtown Providence where many immigrants were held after a raid today. More than 30 janitorial workers were at several State buildings.

The 'La Red de Defensa' rapid response network set up by the Olneyville Neighborhood Association, went into affect, calling out hundreds of migrant people, union members, community groups, clergy and progressive individuals from all over the Providence area.

The protestors made human blockades at the exits of the facility, using direct action to delay and resist the transport of the imprisoned immigrant people. We made a strong show of community power and indignation to fascistic immigration policy.

No One is Illegal!

Related Link: http://nefac.net/en/node/2411
This page can be viewed in
English Italiano Deutsch
http://www.anarkismo.net/article/9389
Anarkismo.net is a international anarchist-communist news service