by Solidarity With Migrants Assembly

We need free access to medical care that gives us the ability of choice, of support, of making our decision, of safe pregnancy, of facilitating a decision to terminate it and decent conditions in any kind of gynecological examination. For migrants and locals, towards the self  determination of our bodies. 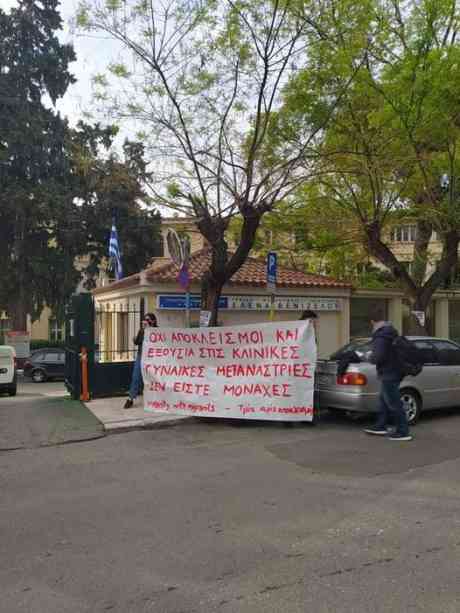 At the point where the discrimination on the basis of gender intersects with the oppression of national origin and color, the access to human conditions of gynecological healthcare becomes significantly difficult.

Οne year since the pandemic outbreak, the Greek state policies concerning healthcare highlighted the insufficiency and deficiencies of the national health system; most of which are being covered by the overwork of an inadequate number of healthcare workers. As Covid patients are increasing, in the absence of first grade healthcare infrastructure, a significant number of patients are deprived of access to an ICU, sheduled surgeries etc. The state decision to not strengthen the national health system (ESY) constantly produces exclusions of thousands of patients. Even before the pandemic, migrants have been facing multiple exclusions on healthcare, as a result of the anti  migrant politics of the greek state.

These exclusions become more obvious, when  in order to have a gynecological test  a migrant woman faces a racist system that includes the absence of translators and social workers, the difficulty of booking an appointment and the indifference of the healthcare personnel. Just to mention an example, a migrant woman who was about to give birth the following month of the visit to the clinic, was given and appointment for the necessary ultrasound a month after the birth date (!).
Apart from that, a racist segregation is taking place inside hospitals, according to which, unexperienced or intern doctors, are testing their skills (experiment) on non white / non local bodies.

We consider all of the above a result of a double discrimination against women migrants; against both their gender and their color/origin, since the only way to get even a simple check, is to be considered an emergency. Migrant women need to face urgent health problems in order to avoid being dealt with indifference. It is in this kind of exclusions that the state policy that treats migrants as a surplus population. Under this perspective, the needs of migrant women remain invisible, since they are not giving birth to a Greek person. As a result, they remain excluded from healthcare, either they want to stop or continue a pregnancy. At the same time in the cities and even more in the camps, migrants have absolutely no access to contraceptive methods, which means they can obtain no control of their bodies.

The ongoing war against migrants makes them vulnerable and forms a threatening condition for their health, as: - chronic health problems remain without monitoring - people without AMKA are excluded from being prescribed the medication they need - patients with problems that need surgery do not have access to care, and that results in their problems getting worse and chronic - there is no pre-symptomatic screening (mammograms, colonoscopies etc.) for conditions that are fully treated if diagnosed early and no routine check-ups -unacceptable living conditions and malnutrition, also of a large number of children and adolescents among else, are contributing to the growing deterioration of their health - people with mental health issues remain without support. All these are added to the fact that the major gynecological practices are mostly hostile to the female bodies even of local women.

A lot of us have had a series of experiences that include at best embarrassment, and at worse devaluation of our bodies and abusive behaviours inside the room of the gynecological examination. Late appointments and indifference in public hospitals often force us to seek out a private doctor - if there is financial ability - and all these processes are always done with great stress and fear for what we may have to deal with each time.

WE DEMAND THE OBVIOUS

We need free access to medical care that gives us the ability of choice, of support, of making our decision, of safe pregnancy, of facilitating a decision to terminate it and decent conditions in any kind of gynecological examination.

For migrants and locals, towards the self  determination of our bodies.

NO MIGRANT WOMAN ALONE AGAINST THE EXCLUSIONS OF THE HEALTHCARE SYSTEM

This page can be viewed in
English Italiano Deutsch
http://www.anarkismo.net/article/32270
Anarkismo.net is a international anarchist-communist news service