A report on the recent Climate Strike action in Wellington, Aotearoa. 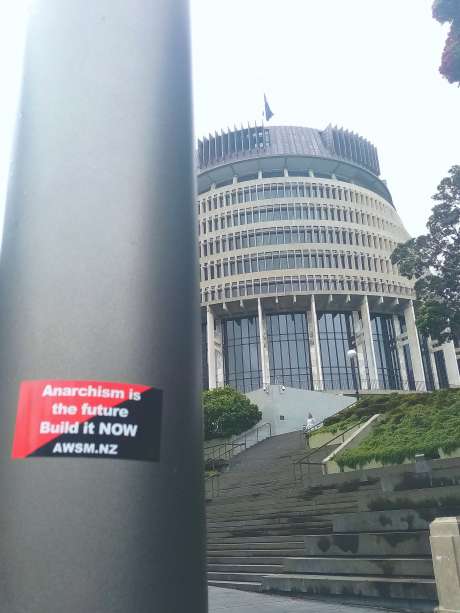 April 9 th saw thousands of students again marching in New Zealands first School Strike 4 Climate protest since Covid-19 hit. In Wellington, about 5000 people marched to parliament while chanting and obstructing traffic and basically having a lot of fun.

One of our organisers was there with a bunch of Aotearoa Workers Solidarity Movement (AWSM) fliers to hand out and to get into discussion.

The fliers were well-received, and a few teenagers seemed very interested in anarchism. There were even a few who already considered themselves anarchists, and our organiser even got the compliment of being told she was based.

A few teens were overheard talking about having to sneak out of school to get to the protest which was good to hear because it shows that they were serious enough to break rules if necessary to make their voice heard.

Our organiser found it easy to start conversations with the other young people because they had cool outfits, pride buttons, and creative signs.

She also got involved with a few non-anarchist socialists and communists. Two of them started having a heated debate about taking a reformist approach over revolutionary politics but as is often the case the debate was leading nowhere and had totally moved away from a discussion about climate change, so our organiser felt it was more energising and worth her time to go back to mixing with the crowd and handing out fliers.

After the marching, there were some speeches at Parliament. The official speeches were mostly from other young adults and surprisingly eloquent Children. They made some good points but sadly, and perhaps predictably, never directly addressed the problem of capitalism.

There was a brief interview with someone representing the Green party followed by open mic time. The AWSM member jumped at that chance. She says that as A lot of kids and young adults who spoke before me pointed out that the politicians arent really doing anything to combat climate change, so I decided to build on that.

I dont remember my exact words, but it was something like this: Hello, I just wanted to say that the reason why the politicians arent helping is that they dont work for us. They work for the companies, and those companies will run the planet into the ground if it means making a little bit more money. Thats what companies do and the politicians wont stop them. And thats why we have to end capitalism before it ends us.

Im happy with how my speech went. The other protesters responded well, and it was easy to give away my remaining fliers.

The protest ended soon after the open mic session, and our organiser met some of the other young adults from the protest afterward, and they asked if she wanted to help organize the next time. All in all, it was an enjoyable day, and a successful one for AWSM, making new links and spreading the anarchist message to new people.

Related Link: https://awsm.nz/?p=9950
This page can be viewed in
English Italiano Deutsch
http://www.anarkismo.net/article/32267
Anarkismo.net is a international anarchist-communist news service