The Power, Conceals the Crisis with the Pandemic Prohibitions.

The Power announced open-ended and incomprehensible prohibitions under the name of Covid19 measures. The Power, which applied the ostensible measures during the pandemic, did not implement realistic measures. It applied the measures by separating the lives of the poor and rich. This segregation was not only economic, but also turned into a social segregation by favoring its own cultural segments. This is evident in the latest pandemic prohibitions announced by the president. While workers are working in workshops, factories and constructions, bosses maintain their isolation. While coffeehouses and cafes are closing, shopping malls remain open, and the religious services continue their operation. These clearly show us this segregation. These restrictions have nothing to do with Covid19. Prohibitions are a product of the effort to control the society that is faced with the crisis and to hide the crisis by making it incomprehensible and imperceptible. 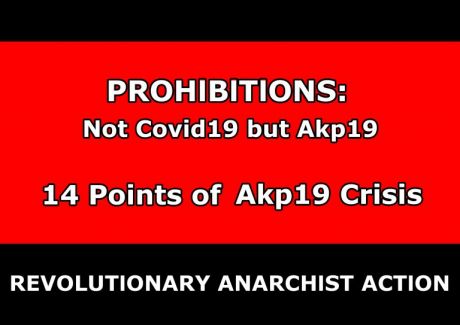 1. Crisis at Foreign Policy: Akp19 increases tensions with its aggressive war strategy outside, in order to protect its power. It does not hold his desired position by attacking every neighbor around it in foreign relations from Libya to Cyprus, from Iraq to Syria. It cannot avoid being the little brother who is scolded and beaten by its brothers USA and Russia. The aggressive war strategy that ended in a fiasco continues with a loss of charisma.

2. Crisis at Internal Affairs: The government, which reduces its existence to a matter of survival for the existence of the state, tries to delay a possible early election. While attacking the internal relations of the opposition, it is clearly concerned about the disintegration of its internal relations. It is afraid of the MHPs ability to let it down. It knows that the unavoidable rise of the dollar and euro will result in the resignations of ministers one by one. Unable to find new excuses, he tries to create new repressions fields by opening the closed politic juridical files. Now, with the excuse of Covid19, It is after a social pressure. It attacks the counterculture on the streets with its guard and police.

3. Economic Crisis: Problems in the economy such as the devaluation of the TL, loan increasing, increasing of the unemployment and inflation got deep with Covid19. While the Minister of Economy said I dont look at the dollar, We can reduce the foreign currency if we want, we dont want it The crisis, which seemed obvious with the resignation of that minister, is now portrayed as a crisis of businesses closing in Covid19. But shut down businesses, millions of unemployed workers are the result of Akp19s economic strategies that steal, enrich the rich and make the poor more poor.

4. Economic Crisis: The prohibitions will mostly affect the sectors in which young workers work. Young means dynamism, it means action. Akp19 does not want to be seen as the cause of the problem by young people. Because of that, it tries to distract young people by showing the cause of the crisis as the Covid19.

5. Sectoral Crisis: During the Covid19 pandemic, there was an excessive increment in some sectors, while there was an extreme decrement in some sectors. While courier and cargo companies, grocery etc. have booming, tea houses, cafes, restaurants, cinemas and theaters had decreased. Many bankruptcies have taken place. The unemployment of workers in these sectors has also affected workers in other sectors. Increasing outside unemployment means cheaper labor for bosses. Inside, it results in the worker silence because of exploitation and fear of being unemployed.

6. Segregation Crisis: Economic separation became evident with the prohibition of the age of 19-65, the restriction of the lives of individuals without economic surplus was shown as an important measure of the government in the Covid19 pandemic. In fact, it was just a show whether these individuals, who had obvious economic burden for the government, were locked at home. The fact that workers relatives were faced with the possibility of carrying Covid19 by who were outside the house all day showed that the restriction was logically meaningless. This forbidden individuals falling into depression with the increase of anxiety, fear and the psychology of confinement.

7. Organisation Crisis: The Power wants to prevent another crisis with Covid19 prohibitions. Defining the physical distance that will be necessary in the one-to-one relationships of the society as social distance, is intended to prevent the talk of the crisis experienced by the wearing of the socialization spaces with great pressure and the finally closure. It is requested to prevent communication of individuals by closing the coffee houses, cafes, locals and cultural centers in the neighborhood. Shopping centers are open, socialization centers are closed; workshops, factories are open, activity centers for the workers of those factories are closed. The Power, which prevents us from talking about the crisis with these prohibitions, maybe soon Covid19 pandemic spreads with speech! Probably it will also want to prohibit speaking.

8. Organisation Crisis: Places where Akp19 spreads cannot be closed. Whether Covid19 spreads or not, the government continues its activities and rallies. It can arrange bread or tea stampede. Thousands can still be transported by buses to the openings turned into shows.

9. Media Crisis: TV series, movies and competitions in the media sector continue with hundreds of workers in front of the camera and behind the camera. The media cannot and does not stop due to its position. Because the media is the indispensable power of the government.

10. Media Crisis: The knowledge of the pandemic is deliberately distorted. Information about the pandemic is both distorted and the necessary and unnecessary information is published at the same time, preventing the understanding of the people. The Power also wants to suppress the information of the society beyond its control with harassment and threats. The pressure on the Medical Association is an indication of this.

11. Information Crisis: Who controls knowledge controls the the society and the individual too. The education system was established with this perspective. In other words, every education system is another control power. Now, an important link of the society with information has been broken in the title of distance education, which was not accessible during the Covid19 pandemic. The excuse is again Covid19. The education of the rich with private lessons continues with the lack of education of the poor. While parents who cannot provide their childs education are experiencing the depression of the children who think they are becoming futile, children also experience the anxiety of futility of future.

12. Health Crisis: It is a persecution experienced by patients facing a pandemic, from diagnosis to treatment. Here again, the rich-poor distinction is clear. State hospitals that never reach the level of private hospitals are shown as not full despite the excessive occupancy. Whether the Covid19 virus is transmitted or not, to be positive or negative Who can stay at home and in the hospital? Is the 14-day period real? Is it transmitted by air? Is it transmitted by water? Unable to solve this confusion, the society is in a confusion that cannot talk about the conditions of right to health and service. While the doctor barely sees the hospital emergency, all channels of the media are treated remotely.

13. Health Crisis: Within the health system transformed into a sector by Akp19, the psychology of all health workers from cleaners to nurses and doctors has turned upside down. The heroes, who are cursed from time to time, are experiencing the contradiction and every day they live with the I am near pressure of Akp19 together with the contagion pressure of Covid19.

14.Termination Crisis: It is the termination crisis of Akp19. Akp19 has been more contagious than Covid19 during its rule, which will be about 19 years, and its disease is not mild, it is a deadly virus filled with severe cases. It is the enemy of the young, the peoples, the worker, the woman, the LGBTI, the tree, the stream, the land, justice and freedom. Drugs and vaccines are sought for the treatment of Covid19. We know that this pandemic is not the first. We know that hundreds of pandemics have been overcome for thousands of years. Covid19 will also be circumvented. And we know that even though the pandemic of Power against justice and freedom is more dangerous than Covid19, every Power pandemic will be destroyed by riots and revolutions. Every virus will be inoculated, every Power will be destroyed to create a new world.

Related Link: https://anarsistfaaliyet.org/sokak/covid19-degil-akp19-yasaklari/
This page can be viewed in
English Italiano Deutsch
http://www.anarkismo.net/article/32105
Anarkismo.net is a international anarchist-communist news service