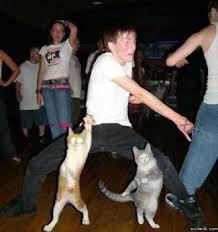 INTRODUCTION: A new decade has begun with bosses and politicians internationally continuing to encourage war, austerity and xenophobia. Its tempting to look at this and become depressed, to give up the struggle and just stay home and watch dancing cats on the internet.

With this in mind, its worth recognising that despite the difficulties involved, those of us fighting this system can have an impact and can achieve successes along the way. Below is a historical timeline listing some of the activities our own small organisation has been involved in as part of the fightback.

We cannot be sure of final victory but we are damn sure that doing nothing will guarantee defeat. Come and join us in being part of the effort, afterall, we will ALL be able to dance when weve won, not just the cats!

Aotearoa Workers Solidarity Movement (AWSM) has been invloved in a number of campaigns and issues since our inception. In 2008 we worked on raising awareness about government attacks on workers rights via a 90 Day Act that allowed for the firing of employees within the first 90 days of being hired with no warning or explanation given.

In 2009 we promoted the concerns of locked out aviation workers, participated in May Day demonstrations in multiple locations and demonstrations in support of indigenous rights related to local council representation in Auckland and for pay equity for women outside parliament in Wellington. Near the end of that year, thousands of workers in 27 cities demonstrated to demand a lifting of the wage freeze for public sector workers. AWSM members were active in 5 cities where the demonstrations happened.

In 2010 AWSM participated in demonstrations in support of call centre workers, striking cleaners, teachers, fast food workers and pickets by retail workers at an electronics shop and a rally in opposition to an increase of levies on workers wages for accident compensation. We also began to hold monthly public discussion evenings in Christchurch and Wellington, which included film showings on the Spanish Civil War and other historical struggles and were well attended. An AWSM internal conference was held that refined some organisational principles.

In 2011 AWSM members assisted grassroots mutual aid efforts in Christchurch, following a major earthquake. Again we participated in May Day activities. Members were also active in anti-fascist work. We also reported on the daily life of hospitality workers, vineyard workers and beneficiaries.

In 2013 we wrote about the sale of public assets, the conditions of sex workers, forestry workers, indigenous rights, welfare and housing. AWSM took part in public demonstrations and meetings about homelessness and the genetic modification of food.

In 2014 our organisation wrote about anti-electorialism and attempted to raise awareness of the basic anarchist position on that issue and about government attacks on workers rights that would limit break times while at work.
In 2015 we wrote about the history of the housing crisis in Aotearoa, the consequences of neo-liberalism and on environmentalism.

In 2016 we published articles about the Olympics, the futility of supporting Social Democratic movements, anti-militarism and attempts by the government to enforce zero hour contracts for workers, and opposition to gangsterism.

In 2017 AWSM wrote about immigration, Private-Public Partnership of assets, housing, a rail strike, and interviewed social activists. We also participated in a successful anti-Nazi rally in Wellington.

Between 2018-2019 we wrote on numerous issues, including striking bus workers, abortion, striking retail workers, movie and book reviews, conspiracy theories, the Christchurch massacre, housing, and in support of Rojava.

We also participated in pickets by striking nurses, memorial gatherings for victims of the Christchurch massacre, observed right-wing rallies in Wellington and Rotorua, actively opposed a visit by the British monarchy, took part in school climate strike marches, environmental meetings, and undertook action days distributing our posters and stickers.

In 2020 so far this year we have engaged in a propaganda tour of the North Island. This involved distributing stickers and leaflets in 8 cities and towns. We have plans to publish a substantial polemic on anti-electoralism and a history of our organisation.

Related Link: https://awsm.nz/?p=4362
This page can be viewed in
English Italiano Deutsch
http://www.anarkismo.net/article/31718
Anarkismo.net is a international anarchist-communist news service