It's Going Down (A Rabbit Hole in Rojava)

by W.E.B. - The Utopian collective

The Syrian Kurds of Rojava should be defended against the Turkish attack on the grounds of self-determination. Solidarity with the Kurds should not depend on illusions in their forms of organization. 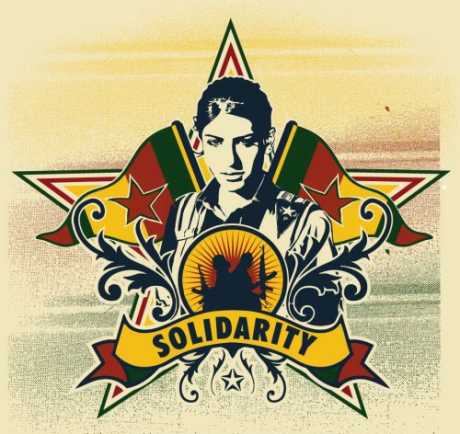 Revolutionary anarchists have a long history of standing for freedom as well as socialism, overturning the old order, and not siding with one or another capitalist force, no matter how free and revolutionary they temporarily might appear. They also have a history of defending the right of oppressed peoples to self-determination against all oppression and imperialism. But when revolutionary anarchists have not kept this political independence, the results have been disastrous both for them and for workers and oppressed peoples in general.

The Kurdish people for multiple decades has been oppressed by governments in Turkey, Syria, Iraq and Iran. Turkey has refused even to acknowledge that they exist. The Assad regime in Syria took away the citizenship of hundreds of thousands of Kurds, only recently partially giving it back under pressure from the Syrian Revolution. And Iraq under Saddam Hussein gassed tens of thousands.

During the Syrian Revolution the Kurds managed to carve out a territory in Syria called Rojava/ Democratic Federation of Northern Syria (DFNS) as an expression of their self-identity. This was done under the leadership of the dominant party there, the PYD/PKK. The result, a mixture of communal and traditional forms, is more social-democratic than anarchist. One feature is that women for the first time have been placed in positions of leadership. Also, in the past few years the Rojavas Peoples Defense Forces have suffered thousands of casualties while allied with the U.S. to defeat the fanatically fascist ISIS. Despite this revolutionary anarcho-socialists have an obligation to defend Rojava in the name of defending oppressed peoples right to determine their own governance and alliances while not endorsing their forms.

But the Its Going Down statement (https://itsgoingdown.org/call-to-action-solidarity-with-rojava-against-the-turkish-invasion/amp/?__twitter_impression=true@)presents something else. It alludes to defending the Kurds and others as oppressed minorities but at the same time is an example of political capitulation. While calling for actions which are absolutely necessary to stop the Turkish invasion of Rojava/DFNS, it also politically endorses the top-down PYD/PKK regime in Rojava/DFNS as an inspiring multi-ethnic experiment; and, by implication, sides with imperialism.

Why is the PYD/PKK administration in Rojava top-down? There are two angles from which to look at the question. First is the history of the PYD/PKK itself. The party began as a more-or-less traditional Third World/Stalinist vanguard with a Great Leader, Abdullah Ocalan, and a sometimes-lethal internal discipline. It conducted years of ultimately unsuccessful guerrilla warfare against the Turkish military using training camps in Syria with the consent of the Assad regime. As it was being defeated, Ocalan, began to formulate a new program, which continued after he was imprisoned and read Murray Bookchin. He later called it democratic confederalism and it appeared to be 180° away from guerilla vanguardism. And following its Great Leader, the party adopted it without a bloody faction fight. But its functioning remained the same. In effect the PYD/PKK put revolutionary libertarian, anarchistand feministcostume on a traditional vanguard party. Therefore, while the cantons, councils, womens brigades and other institutions in Rojava appear to be autonomous and egalitarian, they are really controlled by the PYD/PKK in the same manner that the Communist Party of the Soviet Union managed the seemingly democratic institutions of its day. Rojava really is a state dressed as a non-state.

The second angle is to look at revolutions themselves and compare them to the movement in Rojava. First, real revolutions involve the mobilization of masses of people against kings, landlords, colonialists and capitalists, with the people creating their own institutionsreal dual powerin the process. Frequently the authoritarian reactionaries put together an international coalition to crush them. A case in point occurred in neighboring Syria proper, where hundreds of thousands marched, struck, boycotted and took up arms for years against the Assad family dictatorship. Inspired In part by local anarchists, they organized grassroots Local Coordination Committees to advance the struggle and govern themselves, and the regime in turn brought in Russia, Iran and forces in Lebanon to put down the revolution. Whatever the outcome there, no such thing happened in Rojava. In fact, as the Syrian Revolution gained steam, the PYD/PKK opposed it as thousands of Kurds marched in support. Later the party made a deal with the Assad regime to stand aside so it could withdraw from Rojava and redeploy its forces. Only then did the Rojava revolution take place. Thus, like Macbeth in the Second Prophecy, the Rojava revolution has been cursed from the beginning.

Whatever revolution has occurred in Rojava has been in opposition to and at the expense of the real Syrian Revolution next door. And despite whatever egalitarian features it may have, it has been more of a traditional first stage of a Stalinist/Maoist two-stage revolution than even an attempt to sweep away the old order. That is, the businesses, landlords and tribal leaders largely have been left intact. (Absentee landlords have the legal right to return and reclaim their lands).

Therefore, for anarchists to defend a top-down regime, no matter how critically, is to defend its essential authoritarianism. And it also leads down the rabbit hole of apologizing for its mistakes and contradictions like opposing the Syrian Revolution, collaborating with the U.S. and Assad, and failing to give real power to the people. (This does not mean that as oppressed people, those in Rojava dont have the right to seek such alliances). Moreover, it legitimizes not defending other oppressed peoples against imperialism because of disagreements over their political systems; for example, Iran, Ukraine, the Baltic and Central Asian states, Venezuela and Assadist Syria against U.S. or Russian imperialism.

However, IGD leads down more rabbit holes, in this case by omission. It correctly calls for an end to the Turkish invasion, but it does not demand the withdrawal of all the imperialist forces that have been bloodily meddling in the area for years. It does not demand the departure of the U.S. (which is still there despite Trumps order), Russia, Iran, Israel, and Saudi Arabia and the Gulf states. Moreover, it fails to call for the withdrawal of the Assad regime with its long history of oppressing the Kurds.

In particular, by not demanding U.S. withdrawal IGD puts itself on the side of the U.S. liberal interventionists who raise the twin specters of U.S. betrayal and ISIS reorganizing to push for sending more troops to the area.

By its silence IGD extends its capitulation to imperialism itself.

On the other hand, revolutionary anarcho-socialists should demand the departure of all imperialist powers from Rojava, not just Turkey; and defend Rojava in spite of its governance and collaboration with the Assad regime and U.S. imperialism, not because of it.

*written for The Utopian; A Journal of Anarchism and Libertarian Socialism

This page can be viewed in
English Italiano Deutsch
http://www.anarkismo.net/article/31607
Anarkismo.net is a international anarchist-communist news service