Selby Semela, a leading figure in the 1976 revolt against apartheid, political exile, and author (with Sam Thompson and Norman Abraham), of Reflections on the Black Consciousness Movement and the South African Revolution, passed away on Wednesday, 22 August, 2018, aged but 60 years. 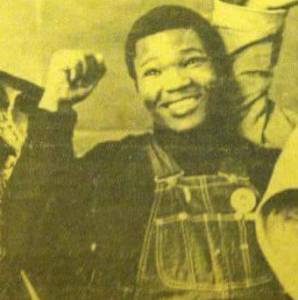 by ZACF
Born January 23, Pimville, Soweto, South Africa, he played a key role in the 1976 student and worker revolt against the apartheid regime. The trigger was the imposition of Afrikaans-language teaching in the wretched segregated schooling system set aside for the black African working class and poor youth. But the revolt was a broader response to apartheid, including the low wages and intense workplace racism faced by parents, and the early onset of neo-liberalism: the state was rapidly raising rates and charges in townships while cutting education money.

The revolt spread across the industrial heartlands of the Witwatersrand and the Vaal, and then into the Western Cape  including here many Coloured working class youth, mostly Afrikaans-speaking. It was part of a wave of struggle beginning with mass worker strikes in the early 1970s. The struggles of 1976-1977 escalated into three general strikes, massive confrontations on the streets with the army and police, and tragically, 575 deaths (451 at police hands alone).

In later years, many political parties have claimed ownership of the revolt, or pretended their undergrounds caused or led it. In truth, it was young men and women like Semela  who was key to the African Student Movement, then the Soweto Student Representative Council (SSRC)  who played the key role. Politically, many were influenced by the Black Consciousness Movement (BCM), which stressed changing minds as the basis of change; and some by the bottom-up democracy promoted by the new unions.

Semela, like others, fled the country into exile. Others, like BCM leader Steve Biko, were killed. From exile, Semela campaigned tirelessly against apartheid, promoting boycotts, disinvestment, and sanctions.

In the 1979 Reflections on the Black Consciousness Movement and the South African Revolution, he was sharply critical of the vanguardist, top-down tendencies to hijack struggles in pursuit of state power, of what he called the old spinster-huckster organisations: the African National Congress (ANC), the Pan-Africanist Congress (PAC) and the South African Communist Party (SACP). He was also dismayed by the BCMs turn towards political party and militarism after 1976. He argued that the BCMs official proclamation as an organisation spells out unfailingly that in its true colours as ideology and hierarchy, it is an enemy of real black proletarian struggle in South Africa. At the time he was influenced by Situationism, an anti-statist, anti-Leninist socialist tradition that emerged in the 1960s; it stressed self-activity, workers councils (soviets) and an end to alienation.

At the time of his death, Semela lived in Columbia, Maryland, and leaves behind his wife (Mary), sons (Linda Mathe, Rise, Naledi and Mohapi), grandchildren (Lwandile, Molemo, and Warona), his brother (Tumelo) and his aunts (Mary Ntilane, Mavis Moloi, and Dora Simela).

Related Link: http://Zabalaza.net
This page can be viewed in
English Italiano Deutsch
http://www.anarkismo.net/article/31119
Anarkismo.net is a international anarchist-communist news service