A call for socialist Left unity is heard widely today in South Africa, but is usually taken as a call for unity of praxis (unity in theoretical programme and action). This is sometimes framed as transcending old divides (these seen as outdated, divisive or dismissed as dogmatic), and sometimes as unity in order to have action (rhetorically set up as the opposite of arm chair theory).

What do we as revolutionary anarchists think? 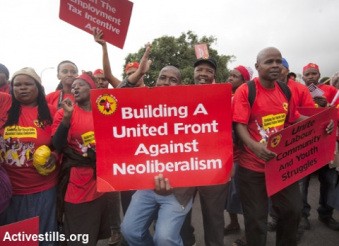 A call for socialist Left unity is heard widely today in South Africa, but is usually taken as a call for unity of praxis (unity in theoretical programme and action). This is sometimes framed as transcending old divides (these seen as outdated, divisive or dismissed as dogmatic), and sometimes as unity in order to have action (rhetorically set up as the opposite of arm chair theory).

What do we as revolutionary anarchists think? We think this approach is fair in intention, asks important questions and aims at addressing the crisis of the left and working class movements.

However, the idea that divisions are outdated, divisive or dogmatic is incorrect. The left  taken here to mean socialist, and not which side of the Parliamentary aisle you sit on  is a spectrum in which a wide variety of anti- and non-capitalist ideologies and traditions rest, from the more reformist social-democracy on one end, to the revolutionary anarchist and Marxist sets, on the other.

Having these very different approaches is not what weakens the left. A call for left unity as a unity of praxis misunderstands (or ignores) the value of difference and progressive debate to theoretical development and strategic innovation. This development and innovation strengthens the left and is best antidote to being dogmatic  so long as it involves honest and open (but respectful and constructive) debate and disagreement. In other words it contributes to social change.

This process requires real engagement and thus also requires avoiding a politics of labelling opponents in a derogatory way or with caricatures in order to dismiss instead of engage them. Dismissing whole sets of ideas and experiences by labelling them dogmatic, divisive or outdated (or ultra-left or reactionary etc.) is itself dogmatic.

The term left, and the term socialism, are not and cannot be reducible to any one of these ideologies, and in particular, are not reducible to Marxism.

If left unity means real unity of praxis it would mean a synthesis. However, a synthesis is not truly possible, given how radically different left traditions are. Either it will create something incoherent or extremely vague (how can you, for example, really blend Leninist vanguardism with anarcho-syndicalist counter-power?) or it will be a unity in name only, but where one pre-existing outlook is imposed.

If its the former, it will not do anything to take the left forward but remove clarity. If the latter, it involves prescribing, somewhat arrogantly, one specific theoretical approach while labelling other views as outdated, dogmatic, divisive etc

This latter approach, unfortunately, has become common practice in many contexts, including in South Africa. It usually means dismissing other views, then prescribing a programme that is basically a brand of Leninism or a left version of social-democracy, often under labels like 21st century socialism, democratic socialism or socialist renewal.

Disastrous past failures are skipped or excused or presented in the best possible light. It is not explained how, for example, Leninism will not (yet again) end in a dictatorship, after it has had over 30 dictatorships and not one example of anything like a workers democracy. It is not explained how, after every single Keynesian government failed in the face of capitalist globalisation, social-democratic schemes will suddenly work now, under global capitalism.

A lot of what is presented as new or as innovative is old wine in new bottles. Ideas get put in new bottles. For example, the idea of building a solidarity economy of cooperatives to end or exit capitalism is very old, going back to P.J. Proudhon in the 1840s; the idea of state-funded worker-run farms goes back to Louis Blanc in the same period. Both approaches have failed to create anything able to end capitalism for over 150 years and its not clear why they should be tried yet again.

A different call for left unity calls for a Mass Workers Party. But this idea is rooted in the Marxist tradition. The call skips very serious debates, particularly over state power, the role of unions, electoralism, representative versus participatory democracy, vanguardism etc. It does not engage with whether an approach based on capturing individual states can achieve anything under neo-liberal globalisation.

While both Marxists, social democrats and nationalists are agreed on a project of political parties capturing state power, anarchism arises as a working class socialist ideological movement that rejects exactly this approach. It is a critique of the standard Marxist political programme but tied to a distinctive anarchist analysis of the state itself as a fundamental site of minority class rule.

Now, there may be many ideas common to both Marxist and anarchist branches of the socialist family, such as the necessity of mass working class struggle, anti-capitalism, etc. But there are deep differences of philosophy.

These include, but are not limited to, on one hand theory, such as anarchisms very different analysis of what the state is and how it works, what class is, whether capitalism can be progressive, etc. This approach leads to the anarchist view that states and parties aiming at state power cannot be used to create a free, non-capitalist social order. On the other hand, as regards application, see also anarchisms vehement insistence on democratic, collective self-reliance and individual freedom within a cooperative communal society; versus the state and party-centred approach that has overwhelmingly dominated in Marxism. An approach, located in its own historical canon, which anarchists argue, amongst other claims attributed to it, gives Marxism its fundamentally authoritarian and anti-democratic nature.

These differences are not a matter of dogmatism or sectarianism. They should also not be erased in the name of left unity, which effectively puts the South African left back on the statist track.

Obviously there are and will be many areas of cooperation and campaigning  would there really be any serious division over, for example, opposing gender-based violence, climate change, organizing workplaces, fighting for land reform?

There will always, however, be a parting of ways over how to pursue these aims, over long-term vision and so on, as per the dictates of ideological difference.

Silencing the debate in the name of unity might be well-intentioned, but it shuts down useful debates and democratic space. Additionally, it prefigures a politics that views difference as dangerous. Historically this, when taken to extremes, saw Marxists in state power lining up left opponents for jail, exile and/or execution, and social democrat-led governments crushing revolutions.

What is of greater importance is a unity through organisation around and in working class struggle. It also means realising the inevitability of conflict, but utilising it as a means of revolutionary institutional and theoretical development. Most surely, a programme of action is needed if these, our organisations seek transformation of society, and if we aim to create unity across the many sites of working class organization and struggle.

However, this programme, its philosophy, key concepts and ideas for change and reconstruction must be tested and reformulated in struggle. Here, struggle is not only meant the fight for better day-to-day working and living conditions, greater political freedoms, and so on. It also involves the constant and consistent development of ideas and action. This requires engaging ideas in an open, honest, critical and self-reflective way, contributing to the development of the instruments of revolutionary, socialist class struggle: the workers organisations (like unions and community-based organisations) to build the power for thorough-going socio-economic reconstruction (the revolution).

This internal developmental struggle in movements should be waged as a battle of ideas between, yes, competing ideological sets for influence in, but never imposed onto the mass movement. To claim that your theory not only understands the path of history, but the eventuality of the destination and thus its own theoretical purity, is pure delusion. We can safely predict particular patterns based on historical precedent, but such definite assertions and teleologies are unscientific, uncritical and effectively impose a claim on and structure of leadership. These leadership forms develop and assert immovable control over movements, suck the creative life out of movements and are fundamentally authoritarian, no matter the initial individual characteristics of those making them.

It is deeply misleading to present theory as a pointless distraction from struggle as it is shaped by and builds it. Anti-theoretical approaches present difference as a problem of dogma or sectarianism  and therefore cannot see that differences are useful  or present theory as a lazy armchair indulgence that prevents us doing things. But theory is both a process and an instrument of human action and socialist theory cannot, therefore, be divorced from progressive socialist action.

Thus any call for left unity, no matter how well-intentioned, fails to address the fact that many left ideologies exist, and misses the point altogether as to what should drive the socialist social transformation many of us are working towards.

What we should think of, rather, is building and strengthening a working class front, based on unions, community-based movements, left groups, cooperatives, etc., which can cooperate around specific campaigns and demands. These movements should be internally democratic, politically pluralist in which different left groups can cooperate with one another  and frankly, much more importantly  engage the mass movements. Movements in which different perspectives are encouraged, developed and tested. No group surrenders political independence  the right to have, express and campaign for their views  in the name of unity, but all can cooperate on specific issues.

This does not mean a conference or symposium of the left is in and of itself useless, but previous attempts have almost certainly descended into different groups and individuals giving their positions, without a useful discussion of convergence or divergence. More important is to have debates and discussions within the larger working class and its movements beyond the left, where there is working class engagement with different ideas, the test of practice, using an ongoing series of workshops, meetings, locals, media and campaigns. In such a situation there is a battle of ideas and a battle for the leadership of ideas, most surely, while guarding against a manipulation of processes, closing debates by labels, or a big man politics of demagogy.

Related Link: http://zabalaza.net
This page can be viewed in
English Italiano Deutsch
http://www.anarkismo.net/article/31076
Anarkismo.net is a international anarchist-communist news service