About the threat to deport Mohamed A. 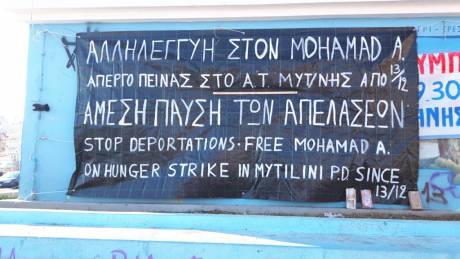 While his health has been constantly deteriorating in the past few days, he was transferred to Mytilenes Vostaneio hospital on 10/1/2017, where the doctors decided that he needs to be hospitalised. He returns to the penitentiary to pick up his stuff, while being assured by the police that he will be transferred to the hospital when he is done.

However, he was held in the penitentiary, where the police told him that he will be taken to the hospital on the next morning. When they finally took him to the hospital the next day, they elicited his consent to not be hospitalised, as they reassured him in regard to his case, and lied to him that they would transfer him to Athens in the next days.

On Thursday 12/1, the police commander announced to Mohamed that his deportation to Turkey had been decided, through the readmission rules of the infamous EU-Turkey deal.

Following pressure from lawyers and people standing in solidarity with him, and while being in a crucial physical and mental state, Mohamed went to the hospital once more, where the doctors asserted that he has to be hospitalised, as he was exhibiting obvious symptoms of fatigue (dizziness, fainting, trouble with sight), and administered saline solution to him. His hospitalization resulted in his deportation being cancelled, which was not the case for 10 other immigrants, who were deported in the morning of Friday 13/1.

For the time being, Mohamed A. continues to be hospitalised, while the police, obviously disappointed in his deportation being cancelled, try every way they can to press the doctors in the hospital to discharge him, so that they can resume his deportation. At the same time, going against the hospitals rules, they have forbidden the entrance of people standing in solidarity with Mohamed in his room.

The current situation namely, attempting to deport an immigrant on the 32nd day of a hunger strike is unprecedented, for the obvious reason of the threat a hunger strike poses on ones life. By doing so, the state and those that serve it take the existing totalitarianism one step further. Its the workings of that same state that takes a 6-year-old hostage as revenge against his parents; the state that prohibits events in public universities; the state that tortures thousands of immigrants in detention centres on a daily basis, until their final deportation. Its a state that prides itself on the jurisdiction to choose life or death for those who dont suit it, those that it views as surplus, those who resist.

Solidarity with hunger striker Mohamed A.

Immediate concession to his demands

Related Link: http://musaferat.espivblogs.net/about-the-threat-to-deport-mohamed-a/
This page can be viewed in
English Italiano Deutsch
http://www.anarkismo.net/article/29933
Anarkismo.net is a international anarchist-communist news service