Southern Ireland is voting toward on whether to allow Marriage equality, that is to extend marriage to couples of the same gender. Young migrants have flocked back to the country in the last 24 hours to help insure the referendum passes. If it does Ireland will be the first country in the work to introduce Marriage equality by popular referendum yet it was one of the last countries in Europe to decriminalise sex between men. In that sense the referendum is about much more than the issue of Marriage but it also a battle against the 'old Ireland' of clerical control and an authoritarian state that sought to control all aspects of the lives of those under its control. The articles that follow are some of the many that the Workers Solidarity Movement have published, for the most part via their Facebook page. 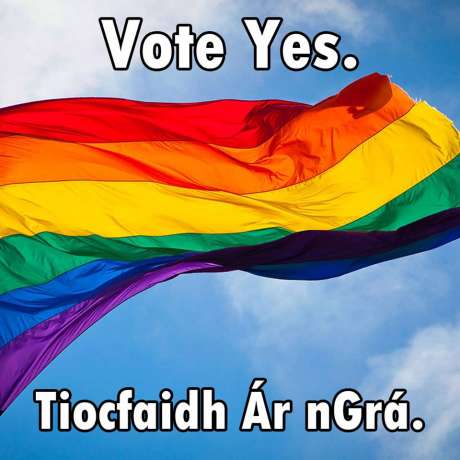 May 22nd - vote Yes to defeat the bigots

May 22nd offers an opportunity for many of us in Ireland to strike a blow against homophobia in voting for Marriage equality.

Those on the No side are the usual suspects who opposed contraception, divorce, sex education and abortion access. They want a return to the Ireland of the 1930s when the Mother & Child Homes & the Magdelene Laundries expose the shallowness of their will no one think of the children appeals for this referendum.

They are taking that approach because their real agenda would horrify the vast majority of people and they know it. Instead we see cunning irrelevancies from surrogacy to adoption being raised, presumably because these were identified as doubt causers that might sway undecided voters in focus groups months ago. Its an entirely cynical exercise that no one should be fooled by.

On the other side it is quite ridiculous to see Labour Party & Fine Gael posters using slogans like Equality for All when these parties have made Ireland an even more unequal place. The richest 1% own 15% of wealth while the poorest 20% owe more than they own. The Yes vote will rightly bring Equality for some in the particular area of marriage but the Fight for Equality is not something either of these parties are involved in, quite the opposite.

The vote on May 22nd will send an important message about the sort of Ireland we want to live in. As such it's important not just that the referendum passes but that it is passed overwhelmingly in order to drive the bigots back into the dark corners.

Marriage as an institution has no great appeal for anarchists. Its primary role in capitalist society is to regulate property rights and to promote social norms. But we also know that in our current society marriage has a social standing to which many people aspire. To tell a significant section of the population that they should be denied access to marriage is to ask them to accept a second­class position vis a vis their straight family members, workmates and friends.

It is perfectly consistent to wish to see the abolition of the institution of marriage and the creation of a society in which peoples love lives dont need to be regulated by the state and to also support equality of access to marriage for LGBTQ people. One of our ultimate goals is to see the abolition of the wage slave system. That, however, does not stop us from fighting for increased wages and improved working conditions in the here and now.

Many of us remember the so­called citizenship referendum in Ireland more than 10 years ago. It (successfully unfortunately) proposed to remove automatic citizenship from the Irish­ born children of immigrants. Anarchists vociferously campaigned against that referendum, not because we had any illusions in what the state meant by citizenship but because we knew what the state meant by denying the children of immigrants access to that citizenship. In this instance we dont have any illusions in the institution of marriage but know very much what message is given by denying LGBTQ people access to marriage.

Imagine for a moment, if you will, a situation whereby access to marriage is available to all citizens in Ireland. Now, lets imagine a situation whereby a proposal is put forward to take that access away from one particular section of society ­ immigrants?, Travellers?, asylum seekers?, LGBTQ people?.... None of us would think twice about taking a position of opposition to such a proposal. Taking a position of support for the current proposal should come just as naturally.

Anarchists dont buy the bullshit on the posters (the Yes ones). Slogans such as Equality for everyone and treating everyone equally are completely meaningless when put forward by political parties who have no interest in pursuing the concept of true equality.

We know that the economic policies pursued by the parties using those slogans have visited untold hardship on working class communities since the foundation of the state. We know that economic inequality is greater than it ever was.

We also know that asylum seekers forced to endure direct provision, women forced to travel abroad for abortions, Travellers forced to live in substandard accommodation, homeless forced to live on the streets because of lack of investment in social housing and many, many other groups will still be victims of and unequal society after this referendum is over.

But without buying the bullshit we can still recognise that a Yes vote in the referendum will be a defeat for the most reactionary elements of society, and will make a real appreciable difference in the lives of many people.

A victory in the referendum can hopefully be the spur which will lead on to further victories. It could give confidence to those pursuing the repeal of the anti-woman 8th amendment of the constitution and fighting for access to free, safe and legal abortion for women in Ireland.

A victory in this referendum can make more people question the real meaning of 'equality' and will hopefully encourage more people to join the fight for social and economic equality for all.

So as anarchists we should join the call for a Yes vote in solidarity with our LGBTQ friends and comrades and because of the message that either a Yes or No vote will deliver to the confidence of those pursuing a better world.

This had created an unpleasant and threatening atmosphere for LBGTQ people on the streets of our cities but also in their homes as vile hate literature comes through the letter box. A lot of people are in pain right now, waiting for the referendum to be over.

We shouldn't be surprised, for too many decades after independence a reactionary clerical inspired agenda had a tight hold over people in Ireland. Those who didn't fit with that agenda with forced into exile in the 20s and 30s or in the case of working class women very often de facto imprisoned in Mother & Child homes or Madeline Laundries. It's been a long hard fight since the 1960s to erode the power the reactionaries once had and they are bitter to see it seep away.

In some of the centres of migration people from Ireland have come together to stage photoshoots calling on people back home to Vote Yes for them. The one pictured took place earlier this evening in Berlin.

It's important not just that the Equality referendum pass but that the Yes vote is massive enough to send the reactionaries scuttling back under the rocks from which they have emerged.

This page can be viewed in
English Italiano Deutsch
http://www.anarkismo.net/article/28201
Anarkismo.net is a international anarchist-communist news service