South Africa: Call For Solidarity With The Exploited Workers At Leeuwenkuil Farm

The Leeuwenkuil farm in Agter-Paarl, Cape Town  one of largest farms in the Western Cape, which produces wine and olives, is one instance of the ongoing intimidation and attacks against workers by bosses on the farms. Here, the farmer, Willie Dreyer, is denying workers rights to freedom of association and freedom of speech. The farmer has intimidated workers by dismissing shop stewards and laying false charges of attempted murder against two farm workers, Amos White and Patrick Philander, and charges of assault against CSAAWUs Assistant General Secretary, Karel Swart. The union has been denied access to the farm on weekends and after hours in the week on a number of occasions. We maintain that workers must be able to meet with any organization or person they choose to in their own time. It should not be the prerogative of the farmer to control workers own time and who they can and cannot meet.

Workers and their families are standing behind their dismissed leaders. They are sharing what they have with each other  their pain and their strength. 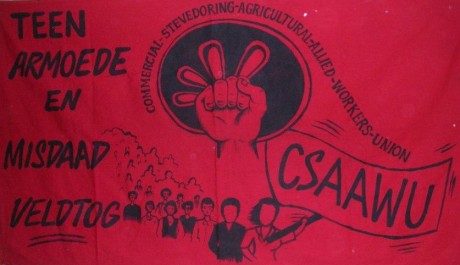 Patrick Philander worked on the farm for 15 years. When he and other workers joined CSAAWU, Willie Dreyer instructed him to convince the workers to leave the union. Cde Patrick refused to do this. 8 months ago, cde Patrick and his fellow worker cde Amos, got onto the back of the farmers truck as they do often on a Sunday to get transport to town. But this time, they were told to fuck off and verbal argument ensued with them and the foreman. On Tuesday, police were called in and charges of attempted murder were laid against the 2 workers. Disciplinary hearings were also held and both workers were dismissed. Since the false charges were laid against him and the dismissal, cde Patricks life has been hell. He has 4 four children and a wife. His family was evicted from their house on the farm. Everyday he is forced to worry about where he will get money for food, let alone money for other necessities. Like all workers, Patrick wants to be able to have a future and wants a future for his children.

1. The right to organise!

2. The right to speak out against abuses!

CSAAWU will fight against ongoing intimidation and threats against workers. We call on organisations to stand with us against this fight. We call for solidarity outside court hearings:
· Cdes Amos White and Patrick Philanders hearing will be held at Magistrate D Court, Paarl, on 23rd November.

· Cde Karel Swarts hearing will be held at the Magistrate Court, Cape Town, on 25th January 2013.

· Leeuwenkuil supplies wine to the Norwegian alcohol chain, Vinmonopolet. We call on Trade Unions in Norway to send letter of protest to the farm and if the abuse of workers continues, we call for blacking action by workers  refuse to handle products from the farm in solidarity with South African farm workers!

· Use your consumer power to boycott Leeuewnkuil wine.

‎5 worker leaders suspended at Leeuwenkuil farm after workers action yesterday. Workers are refusing to return to work until the suspension is dropped. Leewenkuil farm has already laid criminal charges against 2 workers and CSAAWU official and banned the union from the farm. Stop victimising our leaders! Join us in solidarity at 10am on leeuwenkuil farm. Call CSAAWU on 0729913371 for further details

Coms, any updated info on this struggle?

This from CSAAWU's Facebook page, "All false criminal charges dropped against Leeuwenkuil workers! Now to struggle for reinstatement of cdes Amos and Patrick and to build strong workers organisation to defend workers against victimisation and intimidation at the hands of bosses!"

Related Link: https://www.facebook.com/groups/114379168575760/
This page can be viewed in
English Italiano Deutsch
http://www.anarkismo.net/article/24242
Anarkismo.net is a international anarchist-communist news service