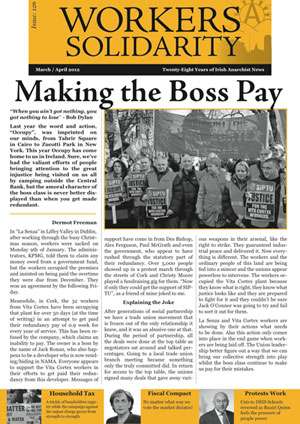 We are not here today to plead for crumbs from the tables of the rich
The liberation of the former Bank of Ireland building in Belfast city centre by “Occupy” provides a glimpse of what is possible if we organise and fight together using the power of direct action and solidarity.
Thinking about anarchism: Transgender
Trans (or transgender) is a term for people whose gender identity and gender expression are different from the sex assigned to them at birth
Anti-Household Tax Campaign Gathers Momentum
PDF file linked to below Over the past two months the Campaign against the Household and Water Taxes has grown from strength to strength. Since the start of government registration in January, campaign meetings across the country have been packed out.
What is the Workers Solidarity Movement?
The Workers Solidarity Movement (WSM) is an anarchist organisation in Ireland. We have branches and members throughout the country and are involved in many different groups and struggles.
"Protests Works", says Minister
By targeting cutbacks on socially disadvantaged communities the government had gambled on the fact that they would not organise and would not resist. Almost immediately, however, they began to realise that it was a gamble that wasn’t going to pay off.
Fiscal Compact: Smoke & Mirrors
The Compact is utterly incapable of preventing future crises and could potentially make them worse, depending on the power dynamics around whether it is used by the Franco-German core to force disastrously destructive policies on smaller Eurozone countries.
Making the Boss Pay
La Senza and Vita Cortex workers are showing by their actions what needs to be done. Alas this action only comes into place in the end game when workers are being laid off.
Related Link: http://www.wsm.ie/sites/default/files/WS126-print.pdf
This page can be viewed in
English Italiano Deutsch
http://www.anarkismo.net/article/22387
Anarkismo.net is a international anarchist-communist news service