New publication: Anarchism In Galicia : Organisation, Resistance and Women in the Underground

The Anarchist movement in Galicia is unknown to English-language readers. These essays tells the stories of the men and women who built it, fought for it, and how they kept it alive in the face of incredible odds. 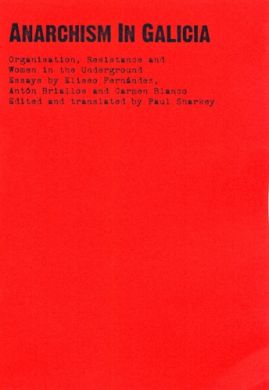 The FAI in Galicia by Eliseo Fernández gives a brief history of Galician anarchism before the foundation of the FAI (Federación Anarquista Ibérica: Iberian Anarchist Federation) in 1927. It goes on to detail the structure and activities of the FAI in Galicia, and shows how the tensions and tactical disagreements within Spanish anarchism played out at a local level, including within the CNT (Confederación Nacional del Trabajo: National Confederation of Labour).
Vigo 1936 by Antón Briallos records the desperate  and ultimately unsuccessful  battle in the streets against the fascist revolt of July 1936. Full biographical details of anarchists mentioned show the roots, structure and fate of the anarchist movement in Vigo before, during and after the Spanish Civil War.
The Anarchist Homes of Libertarian Women by Carmen Blanco tells how Galicias anarchist women sheltered other militants and were central to attempts to rebuild the anarchist movement. This tribute reveals the extent of their involvement and the terrible price they paid.


This page can be viewed in
English Italiano Deutsch
http://www.anarkismo.net/article/20270
Anarkismo.net is a international anarchist-communist news service