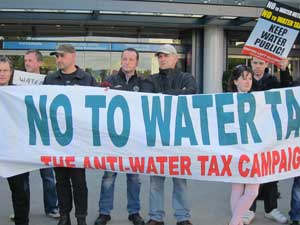 The announcement from the Irish government that households are to face a charge of €100 per annum from January 1st with separate water and property taxes to follow by 2014 has met with fierce opposition across the country.  Radio and television shows have been inundated with texts and phonecalls from irate people who see this latest tax as a step too far and who have been pledging to resist the charge.  In a TV3 IrelandAM poll this morning, Wednesday, 87% of people answered ‘Yes’ to the question “Would you consider boycotting the household charge?”

Already a campaign has been established and in a statement issued yesterday following the announcement of the charge by Minister for The Environment Phil Hogan, that campaign stated:

“This latest tax, part of the EU/IMF memorandum, adds insult to the injury of working people, pensioners and the unemployed occasioned by being forced to salvage Irish and European banks from the consequences of their reckless speculation in the Irish property market……If this Household Tax were accepted everybody knows it would rocket to €500 and upwards within a short period. It would be a curtain raiser for further burdens such as water charges and a property tax on every home……On Saturday,16 July  a meeting of activists and members of left parties and groups, following on from some initial meetings last year, resolved to launch a national campaign of opposition to new household and water  taxes as soon as they were announced by government. A final name for the campaign has not yet been decided until the government clarified its proposals.

The Campaign is calling for a boycott of the charge and a mass non-payment campaign to make it unenforceable.

The Anti Household and Water Tax campaign is open to all those prepared to fight the new tax. Although members and public representatives of left groups will play an important role, it will not be affiliated to any political party or organisation and will have fully democratic structures in place.

A major series of public meeting s in cities and towns around the country will kick off in September to establish local groups in what will be a very active campaign.”

The work will begin now to build a campaign of mass opposition across the country – in every city, town and village.  The strength of the campaign will be that it will be built by ordinary people and our unity, and our ability to say NO, will be our strongest weapons.  At the end of the day, if we all stand together the government will find themselves powerless to impose this tax on us.

The importance of resisting this initial charge lies in the fact that if it is successfully imposed we can expect water and property taxes up to a possible €1,000 per annum within a short number of years.  There is no justification for this tax but its attempted imposition provides us with an opportunity to galvanise our opposition to the thrust of government policy which continues that of the disgraced Fianna Fail/Green coalition and is based on making ordinary workers – both public and private sector - pay the gambling debts of speculators and bankers.

Workers Solidarity Movement members will, in our own communities, be centrally involved in helping to build the campaign against this tax.  As we stated in Workers Solidarity 122: “Non-payment campaigns can be built in every single community.  The first task faced will be to talk to and encourage all members of the community to join the non-payment campaign.  Then we need to organise to support and encourage each other, and to defend each other when the government attempts to attack us through legal or political action. This will require the active participation of as many people as possible.  Politicians, community leaders or trade union leaders cannot do it for us.  The strongest campaigns will be those that involve large numbers of ‘ordinary’ people.

That means people like you.  You don’t need to have any previous experience of organising campaigns to get involved, you just need to have a willingness to work alongside your neighbours and friends to take the simple steps of helping to build a campaign in your area.  A No To Water Tax Campaign has already been established and will be building in every community over the coming months.  Members of the Workers Solidarity Movement will be active in helping to establish this campaign.  We hope that you too will get involved.  Please get in touch and we will support or help in any way we can to help build a local campaign in your area.”

(See below for full article)

Unfortunately Sinn Fein spokesperson, Pearse Doherty, on TV3’s Tonight With Vincent Browne programme last night, Tuesday, failed to back the tactic of non-payment, describing such a tactic as “dangerous”, because those who boycott the tax could be left with bills to pay.  But what Doherty and Sinn Fein, and indeed the government, should realise is that this campaign intends to be successful.  This tax can and will be defeated and therefore nobody will be left with bills to pay.  Just as water charges were defeated in the 1990s by a campaign of boycott and people power, so too this tax will not be imposed on us – if we organise ourselves.

Doherty went on to say that Sinn Fein would be doing “everything in our power to oppose this”.  Yet he failed to back the only tactic that can win.  This is a pathetic position for any political party who claim to be opposed to the charge to take.  Put simply, there is only one way this tax will be defeated  - through a mass campaign of non-cooperation and non-payment.

Sinn Fein’s position is a disgrace.  It’s not enough for us just to complain and moan.  We need to and we can defeat the charge.  By organising in our communities we will be successful.

Related Link: http://www.wsm.ie/c/ireland-water-tax-campaign-community
This page can be viewed in
English Italiano Deutsch
http://www.anarkismo.net/article/20199
Anarkismo.net is a international anarchist-communist news service