Zabalaza Books is proud to announce the publication of 'The Kronstadt Rebellion: Still Significant 90 Years On' pamphlet in PDF format to commemorate the 90th anniversary of the fall of the Kronstadt uprising. 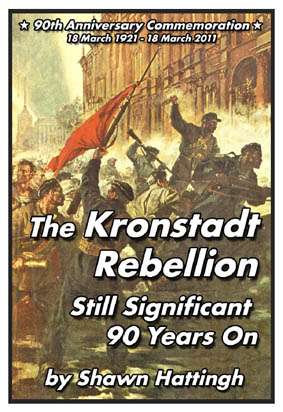 Over the last few years, many on the left have been trying to formulate a vision of socialism based on democracy. As a consequence countless papers and talks have been produced internationally about how socialism needs to be participatory if true freedom is to be achieved. Some have given this search for a form of democratic socialism evocative names, such as Twenty-First Century socialism, socialism-from-below and ecosocialism. In South Africa the desire for a democratic socialism has also inspired initiatives such as the Conference for a Democratic Left (CDL); while even the South African Communist Party has outlined a need for a more participatory socialist agenda. (For a further elaboration on the CDL, and its resultant formation of the Democratic Left Front see the Zabalaza Anarchist Communist Fronts statement at www.anarkismo.net/article/18858)

You can download 'The Kronstadt Rebellion: Still Significant 90 Years On' pamphlet in PDF format from:

My thoughts on both Kronstadt and the Paris Commune on this anniversary:

hope people find this of interest....

Related Link: http://www.anarchistfaq.org.uk
This page can be viewed in
English Italiano Deutsch
http://www.anarkismo.net/article/19041
Anarkismo.net is a international anarchist-communist news service