From the Foreword by Andrew Flood (Workers Solidarity Movement--Ireland):

"This collection of essays by Wayne Pricewill hopefully play a significant part in helping us build the movement we need..This volume represents a good foundation to this process. It revisits many of the essential basic questions and lays down a coherent position in regard to them. Wayne's insights are important to us because they are based not just on a theoretical study of revolution but on five decades of practical experience in the North American left and the anarchist movement" 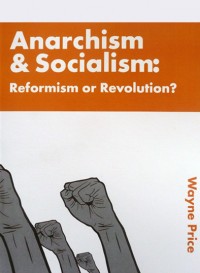 In refreshingly accessible, non-polemical prose, Price distills the best of late 20th century marxist economic thought and anti-authoritarian organizing. This informs his coherent takes on such issues as the relation between class and non-class oppressions, productive engagement with reformist movements, technology and primitivism, and the worldwide economic crash of 2008-2009. Price's recurrent theme is how revolution can possibly be made out of our collective struggles as workers and other marginalized peoples and how such revolution can avoid the "successes" of Leninist revolutions of China, Cuba and the Soviet Union.

Finally, Price's engagement with the trends of anti-authoritarian marxist and anarchist thought serve as a critical introduction to dozens of other essential writers in these traditions, such as Cornelius Castoradis, Ellen Wood, Hal Draper and Paul Goodman.

Part I: What is Revolutionary, Class Struggle, Anarchist-Communism?

Related Link: http://www.thoughtcrimeink.com/
This page can be viewed in
English Italiano Deutsch
http://www.anarkismo.net/article/17415
Anarkismo.net is a international anarchist-communist news service