Nobody to vote for

But plenty to vote against

Only the working class can solve the burning issues of our time, and we can only do it through organisation in the workplace and the community. We will build a society of liberty, equality and solidarity, but we will do it without Parliaments and other top-down bodies. We will do it through a world-wide workers' revolution. 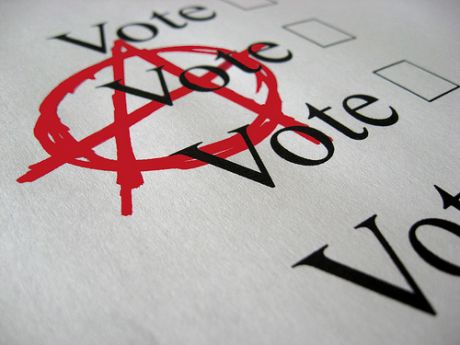 On 21 August, a general election is being held in Australia. The Labor Government is being challenged by the Liberals, but neither party is interested in solving severe problems of inequality, environmental destruction and social alienation. In fact, they will make them worse.

To start with, the Liberals are the party of big business, the party of capital, and are sworn enemies of the working class. Under the leadership of Tony Abbott, they have openly embraced social reaction, stirring up every backward prejudice they can get away with. Everybody knows they are champing at the bit to bring back Work Choices and if they hesitate to say so openly, it is only because they fear the vehemence of the working class response.

The Labor Party, historically the electoral representative of the working class, is little better than the Liberals. Caught between its own servitude to capital and its craven capitulation to the bosses' media, it has time and again reneged on even its timid progressive reforms. In the name of managing Australia's borders, refugees are to be denied entry. In the name of creating a consensus on climate change, they will permit the greenhouse denial industry to veto any action. And in the name of nothing but naked fear, private schools will continue to be given preferential funding over public schools.

Even on industrial relations, Labor is a disgrace. Its Fair Work Act made relatively minor reforms to Work Choices and Labor has continued to fund the Australian Building and Construction Commission, a secret industrial police force which treats solidarity as a more dangerous crime than murder. The Liberals want to kill the unions. Labor's alternative is to keep them chained and malnourished, unable to resist any determined employer.

Are the Greens a progressive alternative? Certainly their rhetoric is a refreshing change from the Libs and the me-too ALP. Their fatal flaw is exposed, however, by their commitment to capitalism. This is clearest to see in the most important issue for them, climate change. They understand the threat of global warming and want to tackle it, but their proposals would put the cost of doing so largely on the working class. This would drive workers into the arms of the greenhouse denial industry and destroy any hope of effective action on climate change. The Greens, therefore, have no answers.

Finally (the assorted right-wing nutters are not even worthy of consideration), in some electorates a socialist might be found on the ballot paper. They rightly name capitalism as the problem and a (vaguely defined) socialism as the solution. They pose, however, no credible strategy for getting there. Only the working class can solve the burning issues of our time, and we can only do it through organisation in the workplace and the community. We will build a society of liberty, equality and solidarity, but we will do it without Parliaments and other top-down bodies. We will do it through a world-wide workers' revolution.

At this election, therefore, there is no shortage of people to vote against. But there is definitely nobody to vote FOR.

This page can be viewed in
English Italiano Deutsch
http://www.anarkismo.net/article/17355
Anarkismo.net is a international anarchist-communist news service