Brighton SolFed writes in Black Flag about the class logic behind the destruction of the post war social contract...

Following a successful launch at this year's London Anarchist Bookfair, the Black Flag collective is releasing its previous issue, 229, online as a PDF download and is also offering a teaser to the new magazine. 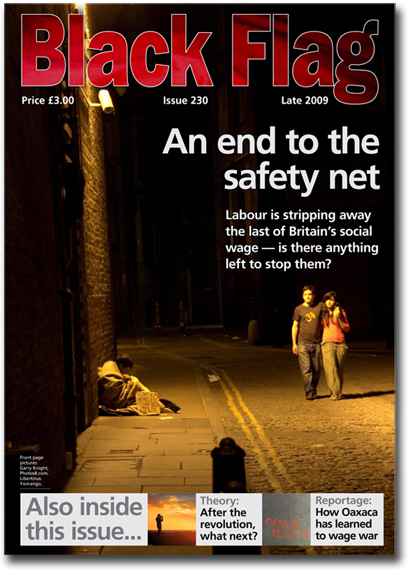 Issue 229 saw a widening out of content for the magazine, with both internal looks at issues of interest to the anarchist movement and analysis of events in the wider world, including the headline article on the aftermath of the Greek riots at the end of 2008 and over the economic crisis gripping the world. To download, go to:

And for Issue 230, Brighton SolFed writes in Black Flag about the class logic behind the destruction of the post war social contract...

ALSO IN THE LATEST ISSUE

* Cover story: Examining the new welfare bill and why its regressive politics must be fought
* Theory: Exploring the roots of anarchist economics
* Overview: The history and present of the anarchist bookfair, by one of the founders of the event
* Breathing Utopia: Our new series on how societys essential functions might work after a revolution, starting with journalism
* In Focus: Part two of Tom Gaynors look at the ideology and legacy of New Labour
* Theory: Examining neoliberalism
* Debate: Nicholas Evans argues the case for a new kind of Wikipedia
* Reportage: The secrets of Oaxaca
* Theory: Was Nietzsche an anarchist?
* Report: The Anarchist Conference 2009 and moves towards another in 2010
* Debate:Manchester No Borders on the need for solidarity with Calais migrants
* Biography: The story of Ethel MacDonald
* Radical Reprint: Ethel and the Civil War

* Ethel MacDonald: An anarchists story
* Black Flame: The class politics of anarchism and syndicalism
* The Battle for Spain: 1936-1939
* The Resistible rise of Benito Mussolini
* Plus our regular pamphlet reviews column: Hobs Choice

This page can be viewed in
English Italiano Deutsch
http://www.anarkismo.net/article/15023
Anarkismo.net is a international anarchist-communist news service