Anarchism In Action: The WSM Is 25

The Workers Solidarity Movement is twenty-five years old this autumn. A quarter of a century ago anarchists in Ireland came together to establish an organisation to promote and fight for our ideas. 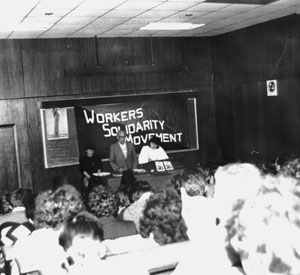 What exactly is our aim? Well, to put it directly, we want to change the world so that we can live in a society that works on the principles of participatory democracy, real equality and full human freedom. In other words we want to build a classless society where there is no division of people into order-givers and order-takers  that is what anarchism stands for.

We are sometimes told that this a lofty aim, perhaps even impractical. We dont agree. In the last century the workers movement came close to achieving what anarchists want on a number of occasions. One fine example was Spain in 1936/37 but there are others.

How we get to an anarchist society, how it will become possible, is completely tied to how we fight on the issues that affect us now. This has always been the anarchist movements strength. We are a movement of people like you, affected and angry about the same issues. We simply want this: to organise to win.

Twenty-five years ago in Ireland, it was hard to find much information on anarchism, let alone meet with other anarchists. The left at that time was dominated by moderates from the Labour Party and those who espoused the idea that the Soviet Union was the sort of society we should aim to create! Yes, you are right, it was strange back then. The WSM was set up as break from this straightjacket.

We rejected the idea out of hand that socialism has anything to do with curtailing peoples freedoms (as was clearly the case with the old Soviet Union). We felt it was important for the left in Ireland to realise was that there is a bigger tradition of rebellion and socialism. This is the libertarian or anarchist tradition  a working-class movement that celebrates individuality, diversity and free expression as well as the struggle for change.

Since the foundation of the socialist movement, we have always been opposed to the idea that meaningful change could be brought about any minority. We want democracy or course  who doesnt  but the Dáil or Stormont have little to do with democracy, they are just about choosing a small group of rulers. You will never find anarchists standing in those elections.

As anarchists, the WSM argues that the most effective way to win any struggle is through our own power, by using direct action. What exactly is that? Well direct action is the idea that we are collectively strong and that if enough of us act together we can bring the necessary change.

A good example of direct action that the WSM was centrally involved in was the defeat of the Water Tax in the Dublin area. We argued that people should defy the law and not pay the tax. This is what masses of us did and the Councils were powerless! We won.

When the WSM was founded, we had just a branch in Dublin and the beginnings of one in Cork. We were small  determined mind, but small. Now, today, there are three WSM branches in Dublin alone, one branch (probably soon two) in Cork, a branch in Belfast  and we hope to have a branch in Limerick later in the year.

There are also WSM members and supporters across the country, in Sligo, Derry, Buncrana, Drogheda, Dundalk, Wexford, Tralee, Forkhill and Killarney to name just a few places. It seems fair to point out that there are very few big working class struggles that go on anywhere on this island that dont see us involved in some way. This is a big step forward - a breakthrough.

A massive achievement for us has been our newspaper  this one that you are reading! It has gone from a circulation of 1,000 to 10,000. It could be a better paper and it could be bigger but all that is just a matter of time and more resources.

Alongside Workers Solidarity, the WSM has produced hundreds of different leaflets, magazines and posters over the years. Moving with the times too, we now have a big internet presence  see wsm.ie.

Membership wise we began with just five  yes five  and now there are just over sixty of us. Membership means agreeing with a general set of ideas about what we stand for; agreeing on a plan of action to spread anarchism; and giving a small amount of money to support the running of the WSM.

We organise ourselves democratically and twice a year we meet in conference to decide on policies and priorities. Over the years these priorities have seen us commit ourselves to a host of important campaigns. We have fought in our unions against partnership with the bosses; we have campaigned for divorce and abortion rights; we have been involved in combating racism and sectarianism.

It would be wrong to suggest that it has been a cake-walk getting this far. When the WSM was formed in 1984, we didnt realise how bad the recession was going to be  emigration was rampant and there was a lot of demoralisation. Here in Ireland we had to contend with Partnership and constant imposition of an agenda on the shop floor that encourages passivity. But we dug in nonetheless and held on.

Crucially, during this first quarter century, we have always been sure about our ideas - not just about our ultimate goal but just as important, about the relevance of our methods. Time and again in our activism, we have won respect and support because we are prepared to stand side by side with people in struggle. So it should be.

At 25 the WSM remains clear about our objective. We intend to be part of a movement that makes a revolution. What we intend to do now is to take the next steps: to grow even bigger and stronger. Doing that of course is not solely up to us. As much as anything we need your assistance: think about getting involved, think about fighting back with us! We have a new world in our hearts.

Related Link: http://www.wsm.ie/public_newswire/wsm
This page can be viewed in
English Italiano Deutsch
http://www.anarkismo.net/article/14358?author_name=Kevin%20Doyle
Anarkismo.net is a international anarchist-communist news service