Thinking About Anarchism - The Selfish Gene?

Anarchists want to change the world. Instead of the present order  capitalism  with its focus on inequality and profits for a few, we want to build a new society based around the principles of participatory democracy, freedom and production for need not profit. For anarchists the type of society we want to build is best summed up by the slogan: To each according to their needs, from each according to their ability. 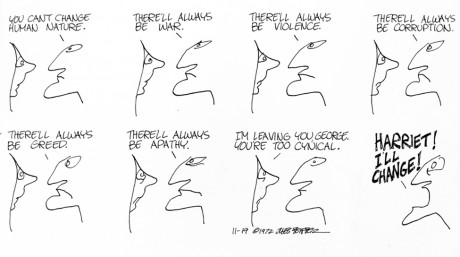 Is an anarchist society possible? Although many people agree that it sounds like a good project, there are also plenty who argue that an anarchist society simply wouldnt work. Come off of it, the objectors say. People are selfish and only interested in looking out for themselves. After all its human nature  most people, given a choice, would put themselves before the rest of society. How could an anarchist society function if this is true?

For anarchists human nature is not an obstacle. In actual fact, anarchists look at it the other way around. In other words anarchists think that it is precisely because of human nature that the prospects for building an anarchist society are so good in the first place.

For anarchists the important issue is the conditions of life under which we live at any one time. Right now  in capitalist societies  at work and in large areas of society, we are forced to compete with one another all the time. Indeed for most of us from an early age it is the idea of competition rather than cooperation that is fostered. For example at school we learn competition via the exams process. And at work we are divided into contract or full-time workers  and so on and so forth.

Everywhere in fact, around us, we are confronted with the notion that as individuals we should be doing better and working harder  and to do this we should compete more with our neighbours. The idea of competition is central to capitalism, and is very effective because under capitalism society is organised hierarchically. The ever present hierarchy means that there is the constant sense of the pecking order  in terms of pay, social position, individual standing.

This has the overwhelming effect of creating a climate of competition and its not any surprise to anarchists that as a result we do see a lot of negative impulses in society and around us. But what must be borne in mind, first and foremost, is that this negativity (or selfishness) has more to do with how society is organised than with who we are as people.

But there is even more evidence that fundamentally human nature is a very positive force. Despite the competition fostered in this society people find loads of ways to make things different. For example throughout the ages workers have created unions and have struggled together  very often against great odds  to shorten the working day and improve pay rates.

Although we all know things could be hugely better, we still owe a debt to those who made the effort and collectively fought for better conditions for all workers. How do such advances by workers  based around the idea of solidarity - tie in with the notion of people being selfish? The truth is they dont. People arent universally selfish of self-centred. A huge part of our lives is about helping others and cooperating  it is on this platform that a future anarchist society can be built.

Human nature is actually one of the strongest weapons we have  as anarchists see it. Why is that? Well, people want to be free! The desire to be free, to run your own life and not be ordered about by a boss (or a husband or a teacher or a cop) is an irrepressible and central part of who we are. Its why people from time immemorial rebel as individuals against an injustice but it is also why communities and groups of workers come together to fight for their rights and for a new order.

Essentially  and you will find it hard to find anyone who will dispute this  we all want to live in conditions where we have justice and equality. Sometimes the idea of justice and equality can seem like a small demand, but at other times the desire for it is the stuff of revolutions. We only have to look back through our own history to see countless examples of where people have taken small stands against seemingly small injustices only to end up shaking great powers into dust. They did this not in spite of human nature but because of it. To be human, after all, is to want to be free.

Jump To Comment: 1
Selfish genes do not mean selfish people!

As I've noted before, I think this article makes two serious mistakes.

How an individual animal would act, therefore, cannot be predicted. In some cases, they would be co-operatives and in others not so.

Second, it implies that solidarity and co-operation are not in our self-interest. This is strange, particularly as the whole argument for (say) unions is that if we stick together than we can do better than if we compete against each other!

As Kropotkin's Mutual Aid documents in great detail, co-operation has an evolutionary benefit. Those who practice it do better than those who do not. Hell, we would not be here as a species without mutual aid! This analysis has become a mainstay of evolutionary theory, under the name "reciprocal altruism".

Anyway, I explore this in more detail in my article on Kropotkin:

In summary, we have evolved to co-operate and do best (both as individuals and as a species) when we do so. This does not mean that we cannot be selfish (we obviously can) but that there is nothing in "human nature" to suggest that capitalism is "natural" or that socialism is "unnatural" -- quite the reverse, I would suggest.

Related Link: http://www.anarchistfaq.org.uk
This page can be viewed in
English Italiano Deutsch
http://www.anarkismo.net/article/11634?author_name=Kevin%20Doyle
Anarkismo.net is a international anarchist-communist news service