We Want a Better World - Help Us

by Friends of Alexandros

Open letter by the friends of Alexandros

WE WANT A BETTER WORLD, HELP US

We are not terrorists, nor "hooded ones" nor "unknown-knowns" 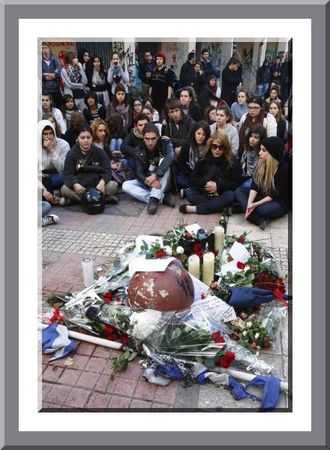 Spanish, French, and Greek versions, plus photos and videos at Tlaxcala: http://tlaxcala.es/detail_artistes.asp?lg=es&reference=243.

Open letter by the friends of Alexandros
Distributed during his funeral on December 9.

WE WANT A BETTER WORLD, HELP US

We are not terrorists, nor "hooded ones" nor "unknown-knowns"

WE ARE YOUR CHILDREN.
They are the "unknown-knowns"

We have dreams. Don't destroy them.
We are alive, don't stop us

You were also young once
Today you run after money, you only worry about
appearances, you've grown fat, you're bald

BUT IT WAS IN VAIN.

Your lives are nothing more than lies, you've lowered your head,
You've dropped your pants and
you're awaiting the day of your death

You lack imagination, you don't love anything anymore, you don't do anything creative
You only buy and sell

MATERIALISM ON ALL SIDES
LOVE ON NONE  THE TRUTH ON NONE

Where are our parents?
Where are the artists?
Why aren't you in the streets?

HELP US
(signed) THE YOUTH

Related Link: http://angrywhitekid.blogs.com/weblog/2008/12/stop-shooting-tear-gas-weve-cried-enough-without-your-help.html
This page can be viewed in
English Italiano Deutsch
http://www.anarkismo.net/article/10992
Anarkismo.net is a international anarchist-communist news service