In either case, it is by building working class struggle that the threat of Fascism will be best addressed. Struggle against a re-elected Trump would be necessary as he accelerates the class polarisation of society and moves further towards dictatorship. Struggle against a President Biden would explode the poisonous identification of the Left with the Democratic Party that Republicans make and from which Fascists benefit. 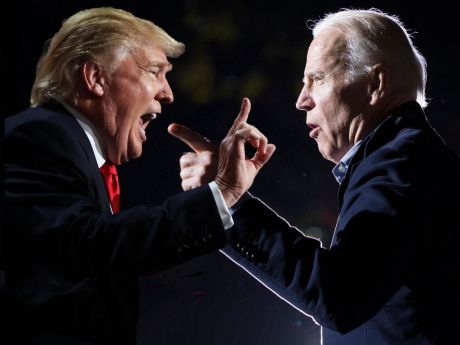 As we go to press, the US Presidential election is fast approaching. Joe Biden, the Democratic candidate, is further ahead in the polls than Hillary Clinton was four years ago and his lead is pretty stable. Trump can only win by either a massive last-minute shift in opinion or by undemocratic means. These could include the Electoral College, semi-legal methods of voter suppression or an outright illegal refusal to count postal votes. So many conventions of US politics have been broken in recent years that we hesitate to rule out any scenario as impossible. There is even discussion about whether Trump would be prepared to recognise an election in which he was defeated.

With our limited resources, picking a winner would be a mugs game, so we will reflect on the meaning of the election and the point at which US society finds itself. The Melbourne Anarchist Communist Group believes it is impossible to hold executive office in the capitalist state on a principled basis. Being President of the USA involves being Commander-in-Chief of the worlds most powerful imperialist military, maintaining a deadly repressive domestic and foreign security apparatus and administering myriad unjust laws. You could institute the worlds most thorough reform program, but youd still be committing crimes 24 hours a day. It is impossible to ever support any candidate for US President, even one whom it might be permissible to support for election to a legislative body.

Donald Trump was elected in 2016 because five decades of neoliberalism had produced the worst inequality in the US in over a century. Far from reversing inequality, Trump has aggravated it and the COVID-19 pandemic has accelerated even further the transfer of wealth to the very richest. Simultaneously, Trump is incrementally abolishing the checks and balances within capitalist democracy that protect it from open dictatorship. Meanwhile, Joe Biden is promising to be a normal President - i.e. to continue the same policies that created the conditions for Trump to be elected. Neither candidate offers anything to the working class.

The current situation is unsustainable. The balance of power between capitalists and workers is so uneven that US inequality will increase until the working class revolts and builds powerful new organisations. Until then, greater inequality will increasingly eliminate the sectors of the population who have a stake in the system. The political centre will continue to dissolve. Society will polarise into Left and Right and, at some point, a showdown will occur.

What should Anarchists do?

The task of Anarchists in the United States is to build the struggle of the multi-racial, multicultural and gender diverse working class against poverty and against racism, sexism and all other oppressons. If Biden wins, the growing Fascist movement in the US will react with great violence, though perhaps not immediately. If Trump wins, his re-election will be greeted with rage by a growing grassroots movement that already rejects US institutions as illegitimate. The need for revolutionary struggle will be more obvious.

In either case, it is by building working class struggle that the threat of Fascism will be best addressed. Struggle against a re-elected Trump would be necessary as he accelerates the class polarisation of society and moves further towards dictatorship. Struggle against a President Biden would explode the poisonous identification of the Left with the Democratic Party that Republicans make and from which Fascists benefit.

The United States is headed for a crisis which, one way or another, will destroy it as the sole super-power. A vote for neither candidate would change that for the better. Only the working class can save the US from Fascism and war. And this can only be done by destroying the United States in a workers revolution.

NO TRUMP
NO WALL
NO USA AT ALL

Related Link: https://melbacg.wordpress.com
This page can be viewed in
English Italiano Deutsch
http://www.anarkismo.net/article/32077
Anarkismo.net is a international anarchist-communist news service