A review of a book about the extreme-Right in the contemporary USA. 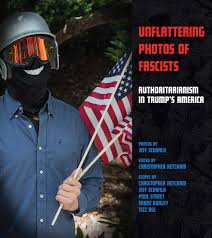 2020 is more than half over and maybe the United States is too. Trump seems to be working on a smooth transition of power from himself to himself regardless of any upcoming election results. Below him, society is fracturing in ways his rhetoric has welcomed and encouraged from day one of his candidacy. There has been a complex mix of influences affecting and effecting this, but undoubtedly prominent among them are various Right-Wing organisations. They have mushroomed in the dark over a number of years but have in recent times fully come to light. Its timely then that Unflattering Photos of Fascists: Authoritarianism in Trumps America has just been published. This short collection of essays and photos looks at the growth of the Ultra-Right under Trump and the interplay between them.

Though this book is certainly welcome, some criticism is required. The title is a bit misleading. Firstly, while fascism has always been a slippery term, there are some people depicted in the photos that perhaps dont qualify for the label. The inside cover actually has a lengthy and well considered disclaimer to that effect. Perhaps it would have been better to be more selective in the choice of photos or to have changed the title of the book?

Secondly, a case can be made that with one or two exceptions, the pictures arent especially unflattering. You could argue that merely being in one of these pictures is an unflattering thing in itself. Certainly to anyone on the Left thats axiomatic. However, if you want to make a better case in order to convince others, these photos might not do it. Yes, some of the subjects are wearing sub-cultural signifiers that appear silly or outlandish to us, but not necessarily to anyone else. They could easily just see a guy with a beard wearing a Trump T-shirt and sunglasses as, well, just that. Or youthful Trump supporters holding amateurishly rendered cartoons on homemade placards as just poor artists. The fact the cartoons once decoded demonstrate a commitment to a brutal ideology is chilling when contrasted with the fresh faced appearance of their makers. Thats not the same as saying the photo is unflattering. The amateurism of their rendering could be interpreted as endearingly ernest.

The photographer Jeff Schwilk writes The photos included may depict the subjects looking ridiculous. It would be easy to dismiss them as fools harmlessly enacting a fantasy. But core white supremacists are as deadly serious today as they have been throughtout the countys history. Future oppressors are often viewed as bumbling idiots. But if we are too complacent, hindsight may show us to be the fools, blind to the threat (p. 47). These are excellent points and his stated intention was sound.There must have been photos that missed inclusion, that either through choice of subjects or composition could have unambiguously portrayed their subjects unflatteringly? There are some photos here that give food for thought in their juxtapositioning of content. Overall the photo section feels like Schwilks camera didnt quite match his honourable intentions. A respectable, slightly missed opportunity in that regard.

Despite the title, this is not in fact solely a photo essay. It contains written contributions that definitely add to the tomes worthiness. Schwilk writes movingly about his personal experiences tackling fascists from as early as the 90s and his own activism. Paul Streets article looks at a taxonomy of fascism and how the phenomenon occupies a Venn diagram with Trumpism. He also usefully deconstructs the myth of Trump as a working-class hero. His article is written in a lively, no-holds-barred-style with some wonderful labels and turns of phrase (Trumpenproletariat, Donito Trumpolini, Great Tangerine God) that rightly find a balance between sound analysis and no respect for his subject. Shane Burleys section charts the rise and fall of the hipster fascist Richard Spencer and delves into the (probably little known to those of us elsewhere) historical legalised racism that existed in Oregon. Tizz Bee also writes on Oregon with a specific focus on Portland. Bees most useful portions establish the nexus between fascists, cops and environmentally destructive businesses in that area. Lastly, there is also a visual glossary of fascist symbols that usefully explains some of the otherwise innocuous-seeming or obscure stuff worn by fascists.

On balance this book is a helpful explanation of whats going on in the America Trump wants. One of the first steps in dealing with an opponent is to understand who they are and this book does that. Not for the purpose of reasoning with them though. As Street explains The Trumpenvolk are impervious to rational persuasion. And this is the point: You dont reason with fascists. You organise against them and defeat them (p. 64). This is a message with universal applicability. Thats another reason this book is worth getting.

Related Link: https://awsm.nz/?p=6978
This page can be viewed in
English Italiano Deutsch
http://www.anarkismo.net/article/32058
Anarkismo.net is a international anarchist-communist news service