After a series of meetings and instances, anarchist political organizations in Latin America have decided to relaunch the Latin American Anarchist Coordination (CALA), within the framework of this complex political and social context that our continent is living through. 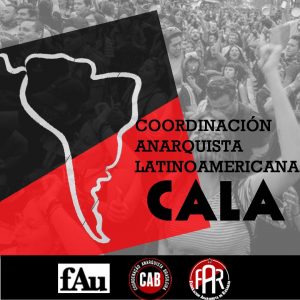 After a series of meetings and instances, anarchist political organizations in Latin America have decided to relaunch the Latin American Anarchist Coordination (CALA), within the framework of this complex political and social context that our continent is living through. Effervescent times run throughout Latin America. Times where the people have won the streets, resisting and confronting the brutal advance of the most reactionary sectors of the continent and the active presence of US imperialism in its different ways of intervening. The streets of Chile, Colombia, Haiti, Puerto Rico and Ecuador have been scenarios of face-to-confrontation with the ruling class, which tries by all possible means to deepen a system of hunger and precariousness, attacking the most heartfelt demands of the oppressed class. To this we must add the enormous popular resistance developed against the civil-military coup in Bolivia, where the racist violence of those above is being fought with barricades, mobilizations and blockades. Clearly, as we have always said, the hesitation and electoral speculation of the parliamentary left are out of place. At this point, the political organizations of especifismi anarchism not only reaffirm the need to be organized and in tune with the historical moment, as we indicated in the Anarchist Conference of Porto Alegre at the beginning of this year:

... We are convinced that Anarchism must be operational, agile and in tune with the new social realities to confront the crudeness that this ruthless system imposes on those below.

But for this, we reiterate, anarchism must be organized politically. It is the political organisation that allows militants to process the necessary discussions and debates, make the pertinent contextual analyses, define action and development plans, refine tactics with precision, but also to design a finalist strategy and adapt said strategy to each period of action, to each juncture ... 

This context, we understand, requires on the one hand to nurture all these aspects depending on firm positions and immediate expressions of solidarity, as well as higher levels of coordinated action throughout the continent. For this we have defined the re-articulation of the CALA, as the expression of coordination between anarchist political organizations from Uruguay, Brazil and Argentina that functioned from the mid-1990s until the end of that decade. Since 2011, we have been making efforts towards higher levels of articulation, fully expressed in the Anarchist Days (Jornadas Anarquistas) encounters that have been developing every two years, bringing different organizations from the region and the world closer.

We understand that this is the time to relaunch CALA as an expression of that coordination of the group of our forces, as an expression of Especifismo, as a historical current and with a projection of Anarchism. A politically organized anarchism well rooted in Latin American peoples and in this time.

In this sense, we also propose the joint task of continuing to develop and deepen theoretical work and the elaboration of conceptual elements that allow us to perform analysis of the reality as accurately as possible, so as to operate in the Latin American situation. Also to establish specific guidelines for this coordinated work, as well as aim to the strengthening and consolidation of new organizations on the continent. The situation demands walking without hurry but also without pause.

We find CALA as a necessary tool at this stage that is unfolding in Latin America, of peoples in the streets resisting the neoliberal model, in order to articulate our presence in these events and provide a firm and clear position of organized anarchism. The stage that opens must find us as best organized and articulated in the region as possible. That's why we invite other organizations to build this road together.

For the construction of Popular Power !!! For socialism and freedom !!!

Related Link: http://federacionanarquistauruguaya.uy/comunicado-de-lanzamiento-de-la-cala/
This page can be viewed in
English Italiano Deutsch
http://www.anarkismo.net/article/31686
Anarkismo.net is a international anarchist-communist news service