As we  activists from Alternative Libertaire and the Coordination des Groupes Anarchistes  gathered in a common congress, we decided to create a new revolutionary organisation : the Union Communiste Libertaire (French for Libertarian Communist Union). 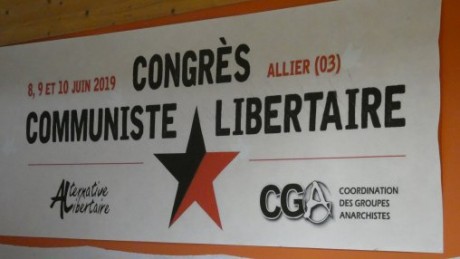 In times of an intensifying capitalist crisis, one would like to make us choose between the liberal bourgeoisie in power and far-right partys in embush.

We cannot accept it. As a contrary, we affirm that another project of society is needed, based on direct democracy, self-management/self-government and federalism.

We want neither a world that has been tailored for those who possess, nor a militarized and locked society under digital surveillance.
Here as well as all over the world, we stand in solidarity with migrants and refugees, and alongside those who wish to knock borders down and break imperialism, neo-colonialism, and more specifically Françafrique.

In France, the anger of Gilets Jaunes (Yellow Jackets movement) vividly remind the state power that class struggle is just as topical as ever. In fact, state power quickly realized it as it uses particularly brutal a repression against this movement.

We took part in the Gilets Jaunes movement the same way we actively commit to the class struggle through building struggles, strikes and unions. Each day we tirelessly resist the capitalist exploitation in our workplaces. And we keep general strike as our horizon.
Where we study, we fight against social selection that become everyday harder.

The Union Communiste Libertaire will struggle alongside those who fight to destroy patriarchy. From our own ranks as well as in society in general, we will fight against sex and gender oppressions, sexism and oppression against GLBTI people.
Against the mechanics of racism, we will be rising up and in support of struggles against police violence.

We will keep on marching with all the demonstrators who take to the streets to oppose climate change and the collapsing of biodiversity, what capitalists are responsible for.

The Union Communiste Libertaire is willing to welcome all those who want to build another society. In cities, surburbs and in the country, everywhere we live, we will build this organisation to materialize a future free from all exploitation and dominations.

This future in which we place our hopes has a name: libertarian communism.

This page can be viewed in
English Italiano Deutsch
http://www.anarkismo.net/article/31456
Anarkismo.net is a international anarchist-communist news service