Body Of YPG Volunteer Michael Israel Returns To U.S. To Be Laid To Rest

This past week on January 11th, the body of Michael Israel, Sacramento organizer and late YPG volunteer, finally arrived in California from overseas. His journey back into the United States took over a month, and began in Syria with a ceremony and mourning procession to send him off. His California community has been awaiting his arrival, and organized a funeral procession of their own to welcome Michael home for the last time. Sacramento and Bay Area activists, individuals from the California Kurdish community, and Michaels friends and family all came together to accompanied him from the San Francisco Airport to Lodi, his hometown. Over fifty people took part in the long-distance procession, traveling in around 20 cars, vans, and buses festooned with YPG and anti-fascist flags, flowers, and pictures of Michael. 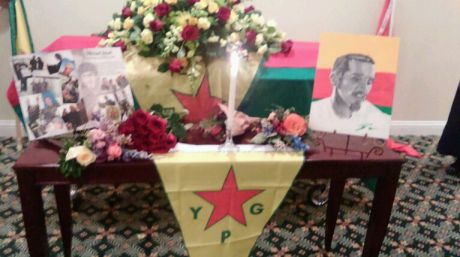 That afternoon, mourners gathered at a staging area to trade stories, share support, and decorate their vehicles while his parents went through the lengthy processes at the airport. As is tradition, small photos of Michael were passed around and pinned to lapels, and Kurdish music was played. A moment of silence was taken when the hearse arrived, and then the final leg of the journey was underway. The procession finally came to an end at a funeral home in Lodi, and was met by even more friends, family, and supporters who came for the visitation. The casket was carried in by Kurdish mourners and decorated with flowers, and three flag bearers stood by as a second moment of silence was observed. Many who were close with Michael stood up to say a few words, sharing their fondest memories of him, what they admired about him, and what his life meant to them. Stories were shared underlying Michaels humility, his quick wit, his selflessness, and his dedication. Above all, these stories reminded us of Michaels humanity, despite the hero status he has in some ways gained. Michael hated the idea of being seen as a hero- so if we see him that way, let it not be because our vision is clouded by the idea of him as a perfect person- let it be for how he changed those around him, and for how he chose to live his life.

After the speaking was over, those in attendance paid their respects to Michael and his parents, and everyone was invited to a nearby banquet room for pizza and refreshments to end the night. Though many tears were shed, people from many different communities were brought together that night. Mike would have liked that, his parents said. Whether it was kind words, bringing flowers, bearing his casket, getting the food, sharing a fond memory, giving a handmade flag or portrait to the family, or providing comfort and support, everyone found their own unique way to honor his memory.

Related Link: https://itsgoingdown.org/body-ypg-volunteer-michael-israel-returns-us-laid-rest/
This page can be viewed in
English Italiano Deutsch
http://www.anarkismo.net/article/29909
Anarkismo.net is a international anarchist-communist news service