How Imperialism and Postcolonial Elites have Plundered Africa: And the Class Struggle, Anarchist-Communist Solution

Roughly 50 years ago we saw the dismantling of most of the European colonial empires in Africa. High hopes greeted the "new nations" that merged - and certainly, a move from colonial rule, with its racism and external control and extractive economies, was progressive.

However, many of the hopes were soon dashed. Politically, most independent African states moved in the direction of dictatorships and one-party systems, normally headed by the nationalist party that took office at independence - and, over time, the military became a major player too. Many of these states were highly corrupt, even predatory, and the gap between the rising local (indigenous) ruling class, and the masses, grew ever vaster. 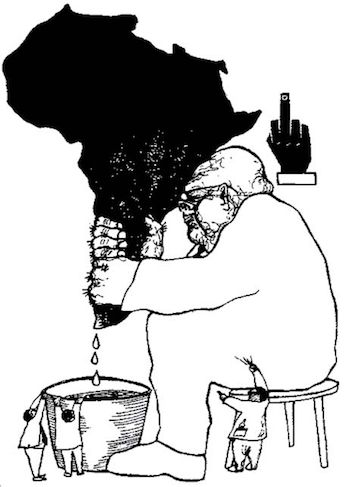 How Imperialism and Postcolonial Elites have Plundered Africa:
And the Class Struggle, Anarchist-Communist Solution

Roughly 50 years ago we saw the dismantling of most of the European colonial empires in Africa. High hopes greeted the "new nations" that merged - and certainly,a move from colonial rule, with its racism and external control and extractive economies, was progressive.

However, many of the hopes were soon dashed. Politically, most independent African states moved in the direction of dictatorships and one-party systems, normally headed by the nationalist party that took office at independence - and, over time, the military became a major player too. Many of these states were highly corrupt, even predatory, and the gap between the rising local (indigenous) ruling class, and the masses, grew ever vaster.

These gaps did not start in the colonial period, as many African societies were already very divided, but they continued and grew over time. The new ruling elites largely emerged from educated middle class groups, along with traditional aristocracies; from independence on, the masses never ran the "new nations."

These were followed by neo- liberal restructuring from the 1980s. Poverty and inequality is widespread, joblessness exists on a massive scale, with more people in absolutely poverty and in warzones here than in any other region worldwide. Postcolonial plans to industrialise the economies by building up local manufacturing through closed, protected economies largely failed. Today, the entire GDP of sub-Saharan Africa, including its economic powerhouse, South Africa, is less than half of that of a single European country, Germany.

Leaving aside South Africa, with its peculiar history, how can this economic situation be explained? We can immediately dispense with views that Africans are more corrupt or less capable.

Besides being based on racist ideas, the fact is that massive economic failures, inequality, repression and low levels of industrial development can be found everywhere - including in parts of Europe, notably its eastern and southern regions.

THE ROLE OF COLONIALISM

A more common explanation, widespread on the left, lays the blame almost completely at the feet of colonialism.

This argument correctly points out that the insertion of much of Africa into the capitalist world economy as a producer of raw materials (from farming or mining) put it at a disadvantage. A country where the core of the economy rests on exporting goods like cocoa or mielies is very vulnerable. If sales or prices fall, serious problems arise. Since these same 'agro-mineral' economies have to import expensive but essential manufactured goods, they are doubly vulnerable.

Many postcolonial industrialization plans were funded by revenue from raw material exports - taxes and where state ownership was extensive, profits - but these dried up in the 1970s with a global capitalist crisis. To try rescue the situation, many states borrowed heavily, but got into ever-worse debt. Some countries, like Zambia, had a window of around 9 years from independence (1964) to global crisis (1973) to try and change decade-old patterns; their prospects were never great.

African economies, heavily oriented to the export of raw materials produced by cheap labour, entered major crises from the 1970s.

BUT MORE THAN COLONIALISM

The problem, though, with this explanation, is that it tells us very little about why countries that export very valuable raw materials - like Nigeria, with its large oil industry - are also in dire economic straits. Indeed, Nigeria consistently has both power and petrol shortages, despite being the world's 12th biggest oil producer. Related to this, not every country with a colonial history remains trapped as a raw material producer or economic loser.

Besides obvious examples like the USA, a former British colony, we could compare Ghana and South Korea, British and Japanese colonies respectively, independent within a few years of each other, with similar economic problems and population sizes and periods of colonial rule. Ghana has endured decades of economic crisis and has lost Western investments and business for years. South Korea has become, despite civil war in the 1950s, a major industrial power, with a larger economy than many Western countries.

A colonial history also does not explain, by itself, why - despite the problems - the ruling class in these countries remains incredibly wealthy: there is an issue here with how resources are controlled that is lost in explanations that look only at colonialism. A focus on external problems leads to a blindness on internal class dynamics.

It is when we look more closely at internal class structures that the answer emerge. In much of sub- Saharan Africa, the new ruling elites that took over from the colonial powers used the state for accumulating wealth. This took the form, in many cases, of direct corruption, which in turn led to declining economies as infrastructures like power and roads started to collapse. Rather than serve imperial interests, this situation led to falling exports of raw materials and political instability.

Since the rise of corrupt rulers is key here, the corruption must itself be explained. At independence, unlike many other regions, there was not much in the way of a local capitalist class. There were few local industrialists, as compared to say India, which meant little local pressure on the state to deliver.

This also meant there was little space for the elites that took power at independence to accumulate wealth - other than by using the state. With the state as the main site of accumulation, vicious ruling class factional battles erupted, leading to a cycle of repression, military coups, one-party states and instability. Often tribal, racial and religious divisions were fanned in these fights, leading to violence.

THE BALANCE OF CLASS FORCES

Working class movements were also not very strong (unions were quite small)and the left often very weak. This made it difficult to start putting brakes on the corrupt elites. As dictatorships spread, unions and dissidents were repressed or co-opted. In the countryside, the system of rule by chiefs and kings, used by the colonial powers, was kept. The small farmers, many of them peasants, are always hard to organize - and rule through chiefs made this even worse.

So, while colonial history is part of the problem, it should not be used to excuse local ruling classes, who plundered their homelands and crushed the popular classes.

The neo-liberal measures adopted in the 1980s had mixed results. Since they blamed all the problems on state intervention, ignoring the world economy, many of their plans were completely wrong - even in capitalist terms. Generally poverty, job losses and prices increased dramatically, although this would probably have happened anyway.

The result was massive revolts, which led to a wave of governments falling. But since these "second liberation" movements generally had very little in the way of a political agenda, besides some democratic reforms, most ended up in the wilderness. Political rights were expanded but the corrupt state remains, as does the agro-mineral economic structure. Recent growth is driven mainly by more demand for raw materials by Asia, but the basic problems of poverty and instability remain.

THE NEED FOR A RADICAL BREAK

Only radical change - a new Africa, based on libertarian and socialist development - can end this vicious cycle. This includes a struggle against the African elites, as well as against imperialism. And this requires, in turn, a break with "third worldist" ideas that ignore class issues inside Africa, and nationalism, which calls for a unity of all Africans - which can only mean a pointless unity between local oppressors and their victims.

And without a progressive left and anarchist agenda, the frustrations and misery of the masses will simply be filled with empty ideas ("democracy") or reactionary movements (like Boko Haram) and sentiments (like racism and hatred of immigrants).

Related Link: http://zabalaza.net
This page can be viewed in
English Italiano Deutsch
http://www.anarkismo.net/article/29193
Anarkismo.net is a international anarchist-communist news service