The State of Climate Change

The planet is warming. This is not new to the earths history, which is billions of years old. But why the controversy regarding this fact? Does it lie in the association between climate change and the man-made contributing factors to this change? Is it because of the reality of the impact of the industrial age; the very foundations on which modern capitalism and empire has been built? Many within these industries spend billions on promoting the idea that climate change is a naturally-occurring phenomenon. But scientists around the world show convincingly that man-made fossil-fuel economies (economies built on the use of oil and coal, which release massive amounts of pollution and carbon dioxide into the atmosphere, creating the greenhouse effect and global warming) have contributed, over a short period of time, to rapidly accelerating the usual naturally-occurring effect. The impact has been, amongst other things, rising sea levels, increased drought and destructive weather patterns. However, this knowledge has been met by a strong response from capitalists  and the politicians they fund  to throw doubt on the role and culpability of the industries that are causing the most damage (and have made them very rich and powerful.) They continue to fund alternative research and media propaganda to do so. 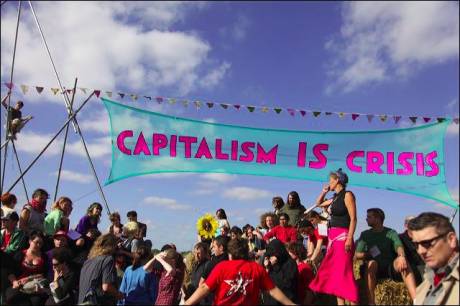 In the early 1980s the international Intergovernmental Panel on Climate Change (IPCC) created a scientific team to accumulate accurate geological and meteorological evidence on weather and air-quality patterns. Their studies showed that the oceans were warming, ice caps vital to regulating the earths climate were shrinking and sea levels were rising as a result. In fact in the period 1961-2003 saw the average sea level rise of between 0.5-1.8m annually. In conjunction, they also reported the rapid deforestation of the Amazon rainforests in South America and a dramatic increase in greenhouse gas emissions, particularly by highly industrialised and industrializing countries, causing accelerated and unnatural warming of the planet. Some of these hazardous materials include methane (CH4), carbon dioxide (CO2) and nitrous oxide (NO2).

Thus, what was occurring was not natural, but caused human activity for the benefit of the wealthy and powerful who controlled these industries. However, these are not the people who experience the worst effects of global warming. Their sole focus is how to profit even more from the labour of others, and how to continue to exploit the earths resources for their own, private benefit. They continue to do so through industries such as mining, oil, chemicals, timber and farming.

The Global Impact of Climate Change

The IPCCs 5th assessment report detailing the extent of industrial impact paints a damning picture of how human-created industries have contributed to climate change. Much of the damage is traced to the biggest companies, e.g. Shell, BP, and the richest nations like (but not only) the US and China, all controlled by a very powerful ruling class in business and the state. South Africa, relative to the size of its economies, is a serious polluter and contributor to the problems our ecology faces, in particular its nationalized industries like Eskom and its tremendous need for coal-burning to run its operations.

Melting ice caps and rising sea levels continue to endanger, or push certain land and aquatic species to extinction, e.g. the polar bear. Also, alterations to the global climate have seen increased occurrences of tropical cyclones since the 1970s. These will also cause, over time, the migration of millions of people from many cities and islands affected by these rising levels and changing weather patterns. This will create crises of historical proportion, a problem exacerbated by negative and violent attitudes towards immigrants and economies not created to dealing with peoples needs.

A NewClear Solution, or a Nuclear Problem?

There is much debate about nuclear energy internationally, with those opposed to it pointing the tragedies of Chernobyl and the more recent Fukushima plant disaster. and the potentially cataclysmic effect on global ecology it could have. Proponents speak to nuclears ability to allow the worlds economy to shed fossil fuel dependence and the longevity of nuclear power provision to humankind.

We cannot divorce the debate from a class analysis, regardless of its good or bad points. Nuclear projects are facing the risk of lack of funding from international donors. Banks seem unwilling to bear the risk of financing such projects. As such, policy-makers are devising schemes to extract the necessary funds from tax-payers via cost pass-through or loans guarantees by offering nuclear vendors fixed price terms [1]. What this means today is that nuclear energy development is not a viable option for developing countries increasing the need for fossil fuels in these countries for their industrial projects.

Much of the facts of human-created global warming and the threats it poses to us all cannot be ignored forever. Sections of the international ruling class have opened the eyes and profit-making minds to it. However, their solutions amount to nothing more than a green capitalism that will not fundamentally alter the conditions of poverty and oppression that most people face globally. It will also take a long time before the owners of fossil fuel industries (both private and state owners) steer away from these historic industries, particularly when these industries are cornerstones of economies around the world. It seems there is just too much money to be made now to worry about the future 50 years from now. Notes:

[1] from a report by Professor Steven Thomas of the University of Greenwich in The Economist, July 2014.

Related Link: http://zabalaza.net
This page can be viewed in
English Italiano Deutsch
http://www.anarkismo.net/article/28581
Anarkismo.net is a international anarchist-communist news service