Statement about the situation in Ukraine from AWU

Statement about the situation in Ukraine from AWU (Autonomous Workers Union). "This is not our war, but the victory of the government will mean the defeat of the workers. The victory of the Opposition also does not promise anything good." [Pусский] 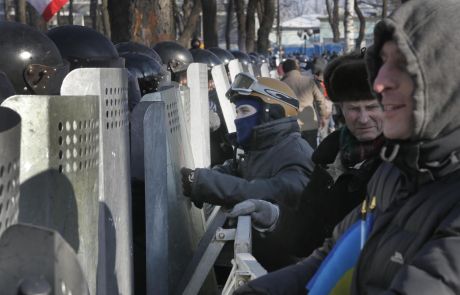 Statement about the situation in Ukraine from AWU (Autonomous Workers Union).

Civil war began in Ukraine yesterday. A less than peaceful demonstration clashed with state defense forces and divisions formed by the adherents of the current government near the Vekhovna Rada (Parliament).

On February 18, police, together with the paramilitaries, arranged a bloodbath in the governmental quarters during which numerous demonstrators were killed. Butchers from the special divisions finished off arrestees. Deputies of the ruling Party of Regions and their bourgeois lackeys from the Communist Party of Ukraine fled from the Parliament through an underground tunnel. The vote for constitutional amendments, intended to limit presidential power, did not take place after all.

After their defeat in the governmental quarters, demonstrators retreated to the Maidan. At 6 P.M., the Ministry of Internal Affairs and the Internal Security Bureau (SBU) declared an ultimatum to the protesters, demanding their dispersal. At 8:00 P.M., special police forces and paramilitaries, equipped with water cannons and armored vehicles, began their raid on the barricades.

Police, the special divisions of SBU, as well as pro-governmental troopers made use of their firearms. However, the protesters managed to burn down one of the armored police vehicles, and it turned out that governmental forces were not the only ones in possession of guns.

According to the data released by the police (on February, 19, 4 p.m.), 24 people were killed: 14 protesters and 10 policemen. Thirty-one policemen received gunshot wounds.

Even if their estimate of losses on the side of the police is accurate, the number of victims among the protesters was definitely diminished. Maidans medics cite at least 30 killed.

One gets an impression that President Yanukovich was certain that by morning the resistance would be crushed, and so arranged for the Opposition leaders to meet with him at 11 A.M. on February, 19. As the negotiations did not take place, we can conclude that the governments plan had failed.

During the unsuccessful operation to clear off the Maidan, the citizens of several western regions occupied administrative buildings and chased away the police.

At the moment the police, as an institution, do not exist in Lviv. According to the SBU, protesters have captured 1500 firearms. In less than 24 hours, the central government lost control over a section of the country.

Right now, the only solution may be the stepping down of the President, however, that would mean that he, his family, and their multiple acolytes and dependents, which form a rather large group in the ruling government, would lose their source of profit. It is likely that they will not accept this.

In the event of Yanukovichs victory, he will become a ruler for life, and the rest will be doomed to a life in which they face poverty, corruption, and the abolition of their rights and freedoms. Rebellious regions are now experiencing massive restorations of the constitutional order.

It is not improbable that the suppression of such terroristic groups in Galicia will have the character of ethnic cleansing. Mad Orthodox radicals from the Party of Regions have, for a long time, seen the conservative Greco-Catholics as the aids of Eurosodom. Such an antiterrorist operation would be carried out with the assistance of the army, as the Minister of Defense, Lebedev, has already announced.

Today, Ukraine experiences a tragedy, but the real horror will start when the government breaks down the opposition and stabilizes the situation.

Signs of the preparation of a mass-cleansing operation became noticeable as far back as early February, when criminal cases were opened against the Maidan self-defense divisions as illegal military formations. According to Article 260 of the Criminal Codex, members of such divisions may face imprisonment for 2 to 15 years. This means that the government was planning to put more than 10 thousand citizens behind bars.

In the regions, as well as in the capital, special death divisions are acting as a supplement to the usual police forces. For example, responsibility for burning alive a Maidan activist from Zaporozhye was claimed by such a death division, calling itself Sebastopol Ghosts. They announced that they are ready to subject Maidan participants in the East to similar treatment.

In the event of the Oppositions victory life would be far from perfect as well.

Although fascists form the minority of the protesters, they are quite active and are not the sharpest tools in the shed. A few days of truce in mid-February lead to conflicts between the rightist groups, resulting in several pointless and violent confrontations, as well as attacks on ideological heretics.

Besides the fascists, old and experienced Oppositionists will also attempt to seize power. Many of them already have some experience with working in government and they are no strangers to corruption, favoritism, and the use of budget funds for personal purposes.

The concessions that the Opposition is demanding in Parliament right now are pitiful. Even the Constitution of 2004, that they are trying to restore, gives too much power to the President (control over the riot police and special forces is one example), and the proportional electoral system, with closed listings, hands parliament over to the control of a group of dictator-like leaders, who can be counted on the fingers of one hand. Together with the President they will rule without obstructions.

Their second demand  the appointment of a Cabinet of Ministers composed of Opposition leaders  is altogether shameful. Are people risking their health, freedom, and life for the sake of someone becoming a prime-minister, and someone-else getting an opportunity to control the flow of corrupt-money? This is the logical outcome of preferring pathos-ridden conversations on the nation, and focusing on vertical structures tied to the same hated politicians, instead of developing ground-up organizations around financial and material interests.

This is the main lesson that Maidan is yet to learn.

However, we will be able to apply this lesson in practice only if the current government loses the battle.

The Opposition inside and outside of the Parliament is broken into multiple hostile and competing factions. If it wins, the ensuing regime will be unstable and lacking in coherency. It will be as bourgeois and repressive as was the Party of Regions before their first show of force against the protesters in November.

The guilt for the spilled blood is partially on the EU which gladly receives money from the corrupt scumbags in Ukraine, Russia, and several African countries, while diligently neglecting to check the source of such investments. It is only after seeing the dead bodies of the victims of such investors, that it gets so very sentimental and full of humanitarian pathos.

This is not our war, but the victory of the government will mean the defeat of the workers. The victory of the Opposition also does not promise anything good. We cannot call the proletariat to sacrifice themselves for the sake of the Opposition and its interests. We think that the extent of participation in this conflict is a matter of personal choice. However, we encourage all to avoid being drafted to serve in the internal military forces controlled by Yanukovich, and to sabotage by all means available the actions of the government.