Anti-abortion bigots defeated on the streets of Melbourne

by Melbourne Anarchist Communist Group - A

Today, a counter-mobilisation by an alliance of womens and Left groups defeated the March for the Babies, the annual anti-abortion rally organised in Melbourne by a coalition of Catholic and Protestant zealots and right-wing politicians. 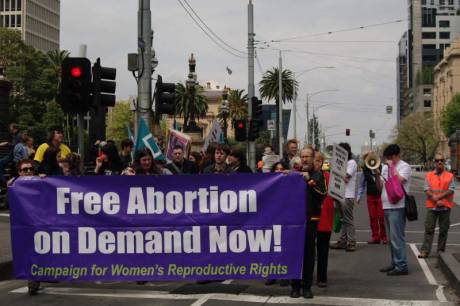 
Today, a counter-mobilisation by an alliance of womens and Left groups defeated the March for the Babies, the annual anti-abortion rally organised in Melbourne by a coalition of Catholic and Protestant zealots and right-wing politicians.

The March for the Babies was first held in 2009, a reaction against the decriminalisation of abortion the previous year. At its height, it drew a crowd of 10,000 or more, but counter-mobilisations in the last few years have helped its decline. The anti-abortionists marched to Parliament House and rallied on the steps, using a massive sound system to drown out opposition from the Left counter-mobilisation.

This year, the counter-mobilisation did something different. There were about 300 of us, about 50% up from last year. Most were young and most were women. The coppers set up some water barriers to keep about ten metres between us and the other mob. On the far side, the podium was waiting, complete with its massive sound system. We did the usual chants and speakers while we were waiting for the anti-abortionists to arrive and listened to a couple of impressive speeches from some very angry women until the podium crew of the anti-abortionists put some music on  very loud. We were not amused and the feeling was obviously mutual.

At this point, the pro-choice counter-mobilisation marched away from Parliament House. Our scouts, as this author later learned, had reported that their numbers were well down on last year, which had in turn been a big drop on 2011. It was a very fast march indeed, because we were racing to intercept the other side. After a brief sit-down at the corner of Collins & Exhibition Streets, we turned right into Collins, then left into Swanston and finally left again into Flinders St, where we came face to face with the anti-abortionists outside the National Gallery of Victoria. To the surprise of most of us, but also to our great pleasure, we saw there were only about 500 of them.

In the front row of the March for the Babies was Bernie Finn, the Liberal member of the Victorian Upper House, who has been the strongest Parliamentary ally of this campaign. One fellow on our side had a placard with a picture of Bernie, pointing out how he says hes pro-life but quoting him in supporting the death penalty. Bulls-eye. The average age of the anti-abortionists was well above ours, while about half of them were men.

So we stood there, in their way  and stopped them. After a short while, a thin blue line of coppers interposed itself between the two groups, facing us. It was clear who they were protecting and from whom. For the next hour we chanted, and arguments raged between the people in the respective front rows. A few times some anti-abortionists were allowed by the cops to walk among us, preaching about the evils of abortion. Nobody thumped them, but we gave them plenty of curry and there was one six-foot plus fellow to whom this author gave a piece of his mind. After a couple of anti-abortionists lost their placards, they gave up that tactic.

Eventually, the March for the Babies threw in the towel. Their numbers were dwindling, their sound truck had left and, although the coppers were determined to protect them from us, they werent inclined to break us up to let them through. The remaining, much diminished, anti-abortionists turned around and marched away. A steward told me they were going back to Treasury Gardens, where theyd assembled, but somebody else said they were going to Parliament by a shorter, but less public route. While a score or so protestors argued vehemently with the one or two anti-abortionists who couldnt drag themselves away from the scene, the MACG contingent left, satisfied with a good days work.

The MACG considers today a victory. We stood up to the foot soldiers of reaction and they blinked. With an anti-abortion Prime Minister newly installed, the religious Right will have the wind in their sails and be discussing what he can do for them. On this front, though, they have been defeated. They tried to march in Melbourne, where abortion has been decriminalised, and they couldnt.

Related Link: http://melbacg.wordpress.com
This page can be viewed in
English Italiano Deutsch
http://www.anarkismo.net/article/26315
Anarkismo.net is a international anarchist-communist news service