The most successful G8 in Northern Ireland ever?

At the post G8 press conference, PSNI Chief Constable Matt Baggot claimed the G8 summit in Enniskillen was the "most peaceful and stable" in its history. The G8 gangsters may have left dazzled and wined by our local political class but beneath the media spin and smokescreen lies the ugly reality of a new Northern Ireland of one rule for the rich and powerful while the rest of us must accept our place in the ladder, or face the consequences. We only need to look no further than the selective internment of Marion Price and others. 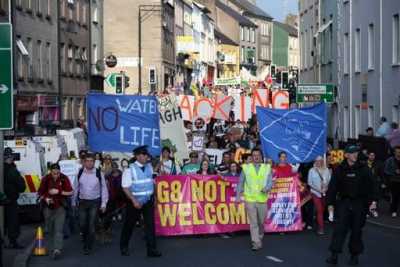 The most successful G8 in Northern Ireland ever?

At the post G8 press conference, PSNI Chief Constable Matt Baggot claimed the G8 summit in Enniskillen was the "most peaceful and stable" in its history. The G8 gangsters may have left dazzled and wined by our local political class but beneath the media spin and smokescreen lies the ugly reality of a new Northern Ireland of one rule for the rich and powerful while the rest of us must accept our place in the ladder, or face the consequences. We only need to look no further than the selective internment of Marion Price and others.

Over the last couple of days we have witnessed a temporary police state in action and a template for managing similar events in the future. An unprecedented security operation and lockdown with up to 8,000 armed thugs, drones and watchtowers, widespread stop-and-search, "fastracked" courts - all the trappings of state violence on display to preserve and uphold the interests of wealth and privilege. If anything only confirming why anarchists have no illusion in the state and its primary role in society!

All geared to supporting a carefully choreographed pageantry locked behind Fort Knox subsidised by the taxpayer to the tune of at least 50 million pounds. Money which could have been better spent on alleviating poverty, mass unemployment, and invested in our schools and hospitals but this has and will never be the priority of our ruling class. Opening the North up for business, eliminating any dissent and cosying up to the dealers of austerity and state terror will never deliver any long-term benefits to the people of Enniskillen or elsewhere; except more of the same in the form of increasing poverty, declining wages and working conditions and benefit cuts.

As the journalist and writer Larrie Penny noted, "It is also about pomp and show. Its a pageant of neoliberal capitalism functioning whether local residents like it or not. That sort of pageantry requires the suppression of dissent, especially in a political climate where the elite's only answer to a drop in living standards and a collapse of faith in democracy is to line up an epic number of police with water cannons and tear gas". (1)

As the system and the G8 unravels before us, the rich and bankers have never had it so good while more and more workers become permanently displaced; income and wealth inequality widens; and the ecological catastrophe threatens the continued existence of the planet as we know it. The question we need to ask ourselves is how do we channel this anger and disillusionment towards building an effective mass movement that will shake the foundations of this rotton status quo, what tools do we use and what change do we really want? How can we make the greatest impact at the coalface in our communities and workplaces?

US President Barack Obama's sensationalised speech may have dazzled a mainly young audience and media at the Waterfront Hall with a Mexican wave and sound bites, but beyond the smoke and mirrors is a speech delivered with drones based on absolute waffle and fiction that would make Joseph Goebels proud.

The reality is that the cracks cannot be easily covered up in the "New Northern Ireland". With sectarian conflict institutionalised and always ready to explode at any moment along with the decimation of the manufacturing sector, the highest level of unemployment and poverty in the UK provides a lethal cocktail. A new confident labour movement must fill this vacuum in a non-sectarian manner which is not afraid to challenge state repression and imperialism.

So Matt Baggot wasn't far wrong that this was the most successful G8 conference ever in terms of the peaceful, tranquil image it promoted to outside investors and vultures but who could have predicted any other outcome other than clashes with the police and an "armed action". Especially against a weak and divided opposition that posed no real challenge to its smooth running in comparison to previous summits and went out of its way to warn off any "trouble makers". The strategic location of the conference and massive security operation supported by a media propaganda offensive and scaremongering may have helped to marginalise any disruption.

The reality is our local ruling class was easily able to diffuse any confrontation by confining any opposition within official, typically legalistic channels with the compliance of sections of the reformist left who have no intention of rocking the boat or the harmless straightjacket of what the state considers as legitimate or illegitimate protest.

Indeed any attempt to move outside the box was swiftly repressed, as in the case of 30 protestors from the republican group RNU who attempted to reach Waterfront Hall on Monday morning during the Obama speech, only to be met with overwhelming force beside Belfast City Hall. The "dissident republican threat" turned out to be an empty gesture highlighting its relative containment with the exception of small protests and sporadic armed attacks which amount to merely armed propaganda rather than in real threat to the status quo.

There was a brief "action" that strayed from the boring ritual of marching from A-B, or a possible police gesture to justify its overtime and massive show of strength, whenever a tiny section of the security fencing was breached on Monday evening, but this was nothing in comparison to the last G8 held in Scotland where a several hundred strong Black Block fought running battles with the police and managed to block the main highway for several hours leading to Gleneagles.

In searching for answers we should not overlook the distinctive weakness and marginalisation of the left and anarchist movement including republicanism; and an inexperienced "anti-capitalist" movement in Ireland, in terms of its lack of infrastructure and social base that can mobilise tens of thousands of working-class people. It was thin on the ground and unable to capitalise on growing anger and disillusionment which tends to express itself in a sectarian and reactive fashion such as the flag protests from earlier this year.

This is despite sections of the left and mainstream union movement spending a lot of time, effort and resources in building a mass rally in Belfast city centre last Saturday and promising up to 20,000 people to lobby our leaders and demand action over climate change, poverty and hunger - the attendance was very poor.

Despite another draft of empty promises these demands in the end are met with the usual blind indifference that also allows opportunist politicians and patronising celebrities such as Bono to jump on the bandwagon. It is not just a matter making "demands", or of this injustice or that unfairness  it is the whole system that is rotten to its core. Poverty, war, racism, sexism and all the rest of the problems we face are not exceptions to the rule or single issues  they are the rule.

Capitalism cannot exist without the state creating poverty, without fighting wars, without oppressing people because of their race or gender and upholding class privilege. Therefore if we want to win, we need to recognise that being right and moral isnt enough. Unfortunately, our society is not a debating chamber where everyone is given an equal voice, and the decisions that affect our lives are not taken on moral grounds. If you have not realised already our rulers dont care about doing right by us. What they care about is power and wealth, and supporting the interests they represent.

To some extent this lack of opposition marks the end of an era of "summit hopping" and massive militant demonstrations that accompanied previous G8 events. This to some degree can be viewed in a positive light; in terms of the marginalizing path of protest mobilisation, focusing energy, preparing for short-term actions and moving from demonstration to demonstration instead of a long-term vision and strategy. But anarchism can and must develop infrastructures and a culture of resistance in workplaces and communities, fostering a libertarian culture of self-organisation, mutual aid and mass direct action.

While the continuing squabbling by rival powers over the conflict in Syria dominated proceedings, these summits are a spectacle where our global and local ruling class sets the agenda; it is important to link day-to-day struggles against the water charges, public sector cuts etc. to the wider neo-liberal agenda the G8 symbolises.

Class oppression maintained by the capitalist system is not simply a small cabal of the ultra-rich in Wall Street or Washington or a small elite group of G8 leaders. It is reproduced in every workplace, every police station, every dole queue, every courtroom, every prison and every territory occupied by Western militaries, and can only be sensibly understood and confronted as such. This system is global capitalism, backed by the armed force of the state, a pattern of economic and political exploitation that reaches into every aspect of our lives.

We should be under no illusions. We are at a crossroads and the choice is stark. Either we, the working class, act as a class and wrest power from the capitalist class or economic stability will be restored by state repression, dismantling social services, cuts to benefits and slashing wages and conditions. The current crisis cannot be transcended through half measures and limited reforms or by voting in a new set of politicians no matter how "revolutionary". We need to think in bold terms, to view our commitment to building a new society as an immediate strategic priority, not as a goal for some vaguely defined future.

The only solution is in one where we realise our own class power, we can finally take control of our lives, our communities and workplaces free from exploitation, alienation and oppression. This future, a libertarian communist one, is truly a future worth fighting for.


Related Link: http://www.wsm.ie
This page can be viewed in
English Italiano Deutsch
http://www.anarkismo.net/article/25752
Anarkismo.net is a international anarchist-communist news service