August saw a gathering of a couple of thousand anarchists from all over the globe in St Imier, Switzerland. This small town was the site of the founding of the Anarchist International in 1872, the gathering was organised to commemorate this event and involved dozens of political, organisational & cultural events. As part of this gathering Anarkismo, the international network that the WSM is the Irish section of, held both a European conference and a global gathering. [Italiano] 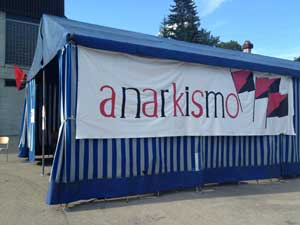 For this 140th anniversary the organizers had arranged to hire all the large spaces in the town as well as using the Espace Noir social center. The Funicular was hired to run participants to and from the campsite above the town. And every bar, restaurant and patch of shade became the location of dozens of spontaneous exchanges between the hundreds or even thousands who had come to St Imier. It is very hard to know how many were present as the 8 formal venues were spread throughout the town and there were hotel's, a squat and sport facilitates being used in addition to the three campsites. The organizers expected between 1 and 3 thousand, some media reports said that more than that arrived. They spent 50000 euro on travel costs of anarchists from the global south so there was a significant number of anarchists from Africa and South America there as well as a few from Asia.

The anarchist movement is not a single unified body, rather there are a number of different formal and informal tendencies based around politics, organisational methods and sub-culture. The overall gathering at St Imier was designed to include all these tendencies but many of them used the fact that so many were traveling to have their own internal meetings during the five days. In the case of the WSM we are part of the Anarkismo network which brings together about 30 organisations in Africa, Europe, North & South America and Oceania. Just over half of these organisations had members at St Imier allowing the holding of both the annual conference of delegates from the European Anarkismo co-ordination and for a less formal but still very business like global Anarkismo meeting.

In addition members of Anarkismo groups gave presentations both in the Anarkismo tent and at many of the other venues. The WSM's Paul Bowman contributed as part of the panel on the roundtable on the Crisis and the PIIGS. The closing meeting of St Imier saw the OSL present a statement to the 600+ who crammed into the hall, it also heard a statement from the IFA and about 15 contributions from the floor. Right at the start of this session the organizers made space for various groups that wanted to make critical remarks about various aspects of the conference organising to deliver prepared statements. These varied from serious contributions on gender imbalance on some of the panels and constantly in interventions from the floor to a defense of some vegans who tried to shut down the BBQ at one of the social centers because they disapproved of people eating meat.

Hosting the conference cost a substantial amount (we think in the region of 160,000 euro) so much of the costs were recovered through charging into some of the many music events and through selling beer. This meant in the evening the town took on something of the spirit of a major music festival, including the singing of revolutionary songs on the streets and in particular on the late night cable railway running up to the campsites. Given the large numbers this also brought some of the problems of a large music festival including a least one serious instance of drunken violent behaviour.

Despite such problems the organizers of the St Imier Gathering are to be congratulated for organizing such a complex event for so many people on a minimal budget. Certainly if there had been more money and more people putting work into the event some aspects could have been better organised. But really those of us who travelled to St Imier and failed to involve ourselves in advance in the work that needed to be done are more responsible for shortcomings than those who put thousands of hours into the organising of the event.

From the perspective of the WSM delegation the various Anarkismo meetings held during the week were a valuable chance to meet comrades whom we might never have met and to reinvigorate our involvement in the Anarkismo network. The network itself is continuing to expand from its very modest beginnings in 2005 in terms of the number of organisations involved, the geographic spread of these organisations and most importantly increased co-operation between them. When each organisation gave a presentation of its work on the morning of the global meeting it was striking just how much of a common political and organisational approach we have despite operating in some very different contexts. It was also clear that the South American organisations in particular have seen significant growth in numbers and influence in the last couple of years.

The wider St Imier gathering will not have any major formal outcomes and was never constructed with that intention. But it did bring together a broad section of the anarchist movement and the organizers are to be congratulated in particular for the effort they made to bring anarchists from Africa, South & Central America and Asia. Participation should have been broader but the organizers efforts were sabotaged by the refusal of the Swiss government to issue's visas to many who were to attend.

During the closing session a Macedonian anarchist spoke very briefly from the floor summing up the conference with "Anarchists - the flame in your eyes brings warmth to my heart."

Links to more about the St Imier gathering

Related Link: http://www.wsm.ie
This page can be viewed in
English Italiano Deutsch
http://www.anarkismo.net/article/23676
Anarkismo.net is a international anarchist-communist news service