On March 7 we learned that one of the most active members of the tenants' movement, Jolanta Brzeska, was found dead in the woods. Her body had been burnt beyond recognition and it is unclear whether she was alive or dead when it happened. 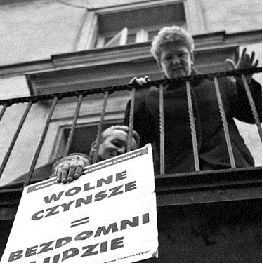 On March 7 we learned that one of the most active members of the tenants' movement, Jolanta Brzeska, was found dead in the woods. Her body had been burnt beyond recognition and it is unclear whether she was alive or dead when it happened.

Jola was 64 years old. She was one of the founders of the Warsaw Tenants' Association, a good speaker and committed activist who went to all demonstrations, who blocked evictions and advised other tenants. She herself was involved in a battle with Warsaw's most notorious slumlord, Marek Mossokowski, and was the last tenant left in a valuable piece of real estate at the time of her death.

Jola lived in a building which had been public housing but became privatized. The area she lived in was attractive to developers, who built luxury housing next to her building, where apartments cost 5000 euros per sq.m. Jola's ordeal began on April 27, 2006 when a group of 10 people banged on her door. This is how she found out that her flat, which had been public housing, had fallen into private hands.

This type of shocking news has been received by thousands in Warsaw since it is the politics of the city not to inform its tenants that claims have been made against their houses or even to inform them that they have been privatized. Many, if not most tenants learn about this after the fact. (1)

Among the people in this group was Marek Mossakowski, a landlord so notorious that even the neoliberal architects of privatization condemn him. Mossakowski's hobby is and was buying claims in real estate. A few years ago, it was quite hard for pre-war owners or their heirs to get back property which was communalized after the war. It is still quite difficult for ordinary people without connections. This is why some people with claims who have no legal saavy were selling them. Mossakowski has been known to have bought real estate claims for 50 zloty (12.5 euros) for property he later tried to get 1.25 million euros for. [2] A specialist in antiques, he could also get all sorts of old papers and documents. He acquired claims in many properties under unclear circumstances. [3]

This slumlord is known for his unscrupulous tactics for driving people out of their flats. If they are not scared by his initial, often illegal attempts to imposed huge rents and "fees" on them, other methods begin. In the case of Jola's house, a few days after his initial visit, the tenants received a letter. In it he claimed that, since the property was transfered, all of them were "illegal" inhabitants of the building. (This is a direct violation of the law as, even if he wanted to kick them out, he would have to give them 3 years notice, or provide them with replacement housing.) Since he considered them "illegal", he demanded that they pay additional "damages" to him, amounting to almost 500 euros a month.

Jola knew that this was illegal and refused to pay. Like many people in her situation, her rent now was much higher than her income. (Most recently she received about 350 euros a month.) This is when all sorts of harrassment started. Mossakowski even tried to break into her house and to register her flat as his place of living.

Unlike Jola, who could not get a replacement flat from the city, the millionaire Mossakowski, owner of real estate all over town, is a tenant in municipal housing. (Nobody knows if he really lives there, but he has the flat.)

While the city is privatizing housing, they rarely provide the old tenants with replacement flats. (Last year only 90 were given.) When people are in such a situation, the city looks at their income and, since the criteria is much too low, many people, even retired, are not entitled to get replacement public housing. The bureaucrats in charge of destroying the public housing system look for any reason to deny housing, often breaking all rules. In the case of Jola, she was denied the right because her daughter had a flat. Even though this should play no role, we know that the city sometimes tells people who have lost their flats and apply for a replacement that they can go live with parents or children - even in other cities.

Jola was angered by her situation and decided to fight back. In the tenants' movement, she fought for a change in policy, so that other people would not have to go through what she was experiencing.

Despite the fact that her case was still in court, Mossakowski said she was her debtor and owed over 20,000 euros. At the time of her death, she was the last tenant remaining in that house.

Jola's daughter reported that she had disappeared in very mysterious circumstances. After a few days she was told that a burnt body was found in the woods on the same date Jola went missing. It was burnt beyond recognition but a few objects she had on her had not been destroyed, including her house keys, glasses and hearing aid.

One thing is for sure: people involved in the tenant movement blame the situation on bad housing politics that leave public housing tenants at the mercy of unscrupulous speculators and slumlords. We vow not to forget Jola's ordeal and her contribution to the struggle which we will continue with more resolve than ever.

Notes:
1. This is why we have got and published internal documentation compiled by the city and have been notifying and gathering those who might be affected.
2. See: http://warszawa.gazeta.pl/warszawa/1,34889,7958665,Mial_tylko_50_zl__teraz_ma_kamienice.html#ixzz1G1OpNKlu
3. We managed for the first time in Warsaw to block an illegal privatization attempt. Mossakowski was also a figure in this story.


Related Link: http://cia.bzzz.net/housing_activist_found_dead_in_warsaw
This page can be viewed in
English Italiano Deutsch
http://www.anarkismo.net/article/18972
Anarkismo.net is a international anarchist-communist news service