Egypt's uprising and its implications for Palestine

by Ali Abunimah - The Electronic Intifada

We are in the middle of a political earthquake in the Arab world and the ground has still not stopped shaking. To make predictions when events are so fluid is risky, but there is no doubt that the uprising in Egypt -- however it ends -- will have a dramatic impact across the region and within Palestine. 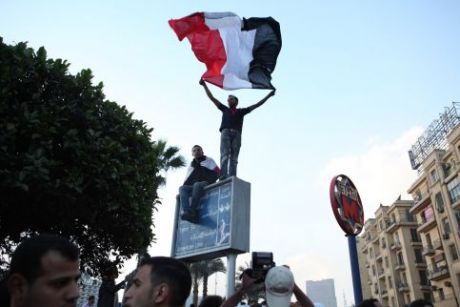 If the Mubarak regime falls, and is replaced by one less tied to Israel and the United States, Israel will be a big loser. As Aluf Benn commented in the Israeli daily Haaretz, "The fading power of Egyptian President Hosni Mubarak's government leaves Israel in a state of strategic distress. Without Mubarak, Israel is left with almost no friends in the Middle East; last year, Israel saw its alliance with Turkey collapse" ("Without Egypt, Israel will be left with no friends in Mideast," 29 January 2011).

Indeed, Benn observes, "Israel is left with two strategic allies in the region: Jordan and the Palestinian Authority." But what Benn does not say is that these two "allies" will not be immune either.

Over the past few weeks I was in Doha examining the Palestine Papers leaked to Al Jazeera. These documents underscore the extent to which the split between the US-backed Palestinian Authority in Ramallah headed by Mahmoud Abbas and his Fatah faction, on the one hand, and Hamas in the Gaza Strip, on the other -- was a policy decision of regional powers: the United States, Egypt and Israel. This policy included Egypt's strict enforcement of the siege of Gaza.

If the Mubarak regime goes, the United States will lose enormous leverage over the situation in Palestine, and Abbas' PA will lose one of its main allies against Hamas.

Already discredited by the extent of its collaboration and capitulation exposed in the Palestine Papers, the PA will be weakened even further. With no credible "peace process" to justify its continued "security coordination" with Israel, or even its very existence, the countdown may well begin for the PA's implosion. Even the US and EU support for the repressive PA police-state-in-the-making may no longer be politically tenable. Hamas may be the immediate beneficiary, but not necessarily in the long term. For the first time in years we are seeing broad mass movements that, while they include Islamists, are not necessarily dominated or controlled by them.

There is also a demonstration effect for Palestinians: the endurance of the Tunisian and Egyptian regimes has been based on the perception that they were strong, as well as their ability to terrorize parts of their populations and co-opt others. The relative ease with which Tunisians threw off their dictator, and the speed with which Egypt, and perhaps Yemen, seem to be going down the same road, may well send a message to Palestinians that neither Israel's nor the PA's security forces are as indomitable as they appear. Indeed, Israel's "deterrence" already took a huge blow from its failure to defeat Hizballah in Lebanon in 2006, and Hamas in Gaza during the winter 2008-09 attacks.

As for Abbas's PA, never has so much international donor money been spent on a security force with such poor results. The open secret is that without the Israeli military occupying the West Bank and besieging Gaza (with the Mubarak regime's help), Abbas and his praetorian guard would have fallen long ago. Built on the foundations of a fraudulent peace process, the US, EU and Israel with the support of the decrepit Arab regimes now under threat by their own people, have constructed a Palestinian house of cards that is unlikely to remain standing much longer.

This time the message may be that the answer is not more military resistance but rather more people power and a stronger emphasis on popular protests. Today, Palestinians form at least half the population in historic Palestine -- Israel, the West Bank and the Gaza Strip combined. If they rose up collectively to demand equal rights, what could Israel do to stop them? Israel's brutal violence and lethal force has not stopped regular demonstrations in West Bank villages including Bilin and Beit Ommar.

Israel must fear that if it responds to any broad uprising with brutality, its already precarious international support could start to evaporate as quickly as Mubarak's. The Mubarak regime, it seems, is undergoing rapid "delegitimization." Israeli leaders have made it clear that such an implosion of international support scares them more than any external military threat. With the power shifting to the Arab people and away from their regimes, Arab governments may not be able to remain as silent and complicit as they have for years as Israel oppresses Palestinians.

As for Jordan, change is already underway. I witnessed a protest of thousands of people in downtown Amman yesterday. These well-organized and peaceful protests, called for by a coalition of Islamist and leftist opposition parties, have been held now for weeks in cities around the country. The protesters are demanding the resignation of the government of Prime Minister Samir al-Rifai, dissolution of the parliament elected in what were widely seen as fraudulent elections in November, new free elections based on democratic laws, economic justice, an end to corruption and cancelation of the peace treaty with Israel. There were strong demonstrations of solidarity for the people of Egypt.

None of the parties at the demonstration called for the kind of revolutions that happened in Tunisia and Egypt to occur in Jordan, and there is no reason to believe such developments are imminent. But the slogans heard at the protests are unprecedented in their boldness and their direct challenge to authority. Any government that is more responsive to the wishes of the people will have to review its relationship with Israel and the United States.

Only one thing is certain today: whatever happens in the region, the people's voices can no longer be ignored.

Ali Abunimah is co-founder of The Electronic Intifada, author of One Country: A Bold Proposal to End the Israeli-Palestinian Impasse and is a contributor to The Goldstone Report: The Legacy of the Landmark Investigation of the Gaza Conflict (Nation Books).

Related Link: http://electronicintifada.net/v2/article11762.shtml
This page can be viewed in
English Italiano Deutsch
http://www.anarkismo.net/article/18649
Anarkismo.net is a international anarchist-communist news service